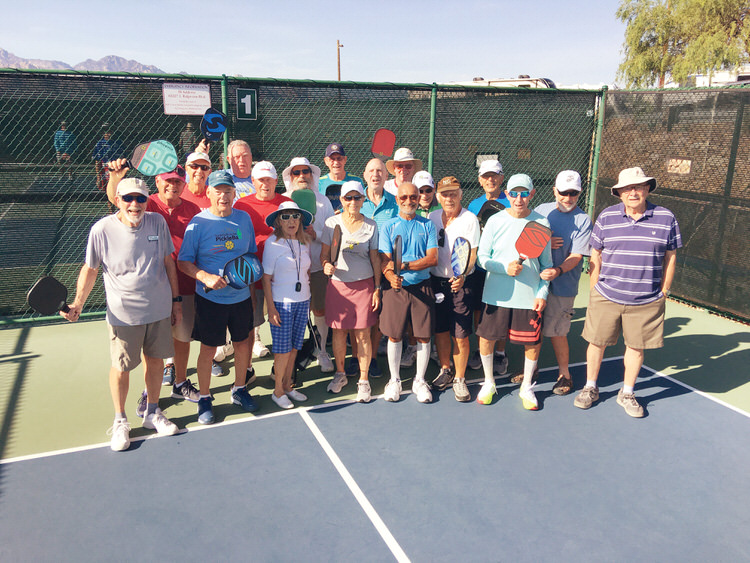 A review of these names would suggest an inconsistency, since we are told that statistically women live longer than men. It could be that more women members aged 80 or older prefer to remain ageless. Or another explanation could be that men who play pickleball live longer.

Most of the over 80-year-old members have played pickleball for five to 10 years, but some have been playing 15 to 20 years. These members indicate that, on average, they play three to six times each week. Some of the players have even played competitively outside of SaddleBrooke. Bob and Nancy Shelton have participated in many tournaments, including the Huntsman and Nationals, when they were first played in Arizona.

Many of the members played other sports, particularly tennis, before undertaking pickleball. Some have also played golf, softball, ping pong, and even lawn bowling. However, Don Burkhead reports he never played any sport before pickleball. A few of the players continue to play golf and softball in addition to pickleball, but the majority now focus on pickleball playing only.

When asked how these members became pickleball players, many responded that they were introduced to the sport by friends. Others reported that they saw pickleball games and decided to play because it looked like fun. Others said that they were looking for a new form of exercise. Jeb Benter explained, “It just looked like, and is, good exercise. Plus, it relieves stress, as you can basically slam the ball as hard as you can without injuring your opponent. That provides a visceral release.” Almost everyone indicated that playing pickleball has been great for socializing with others and making friends.

Some of the players have suggestions to improve the game. Ed Mandler has proposed that the ball itself be changed by removing the holes because when the ball lands on one of the holes, it bounces in an unanticipated manner. Jeb has suggested increasing the “kitchen” by one foot to alleviate the advantage that long-armed opponents have. Steve Penner has questioned whether his age group should be allowed to hit a return after two bounces, perhaps twice during a game. The vast majority though have expressed satisfaction with the rules as they now stand.