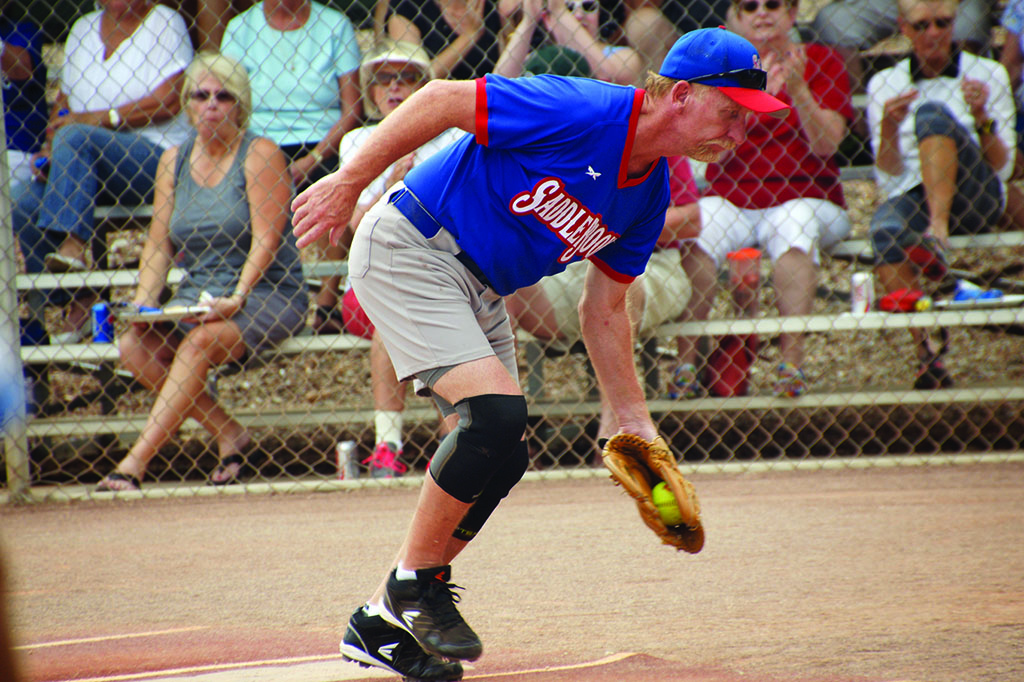 The crowd watches as this catcher makes the out at the plate; photo by Paul Jarzembinski. 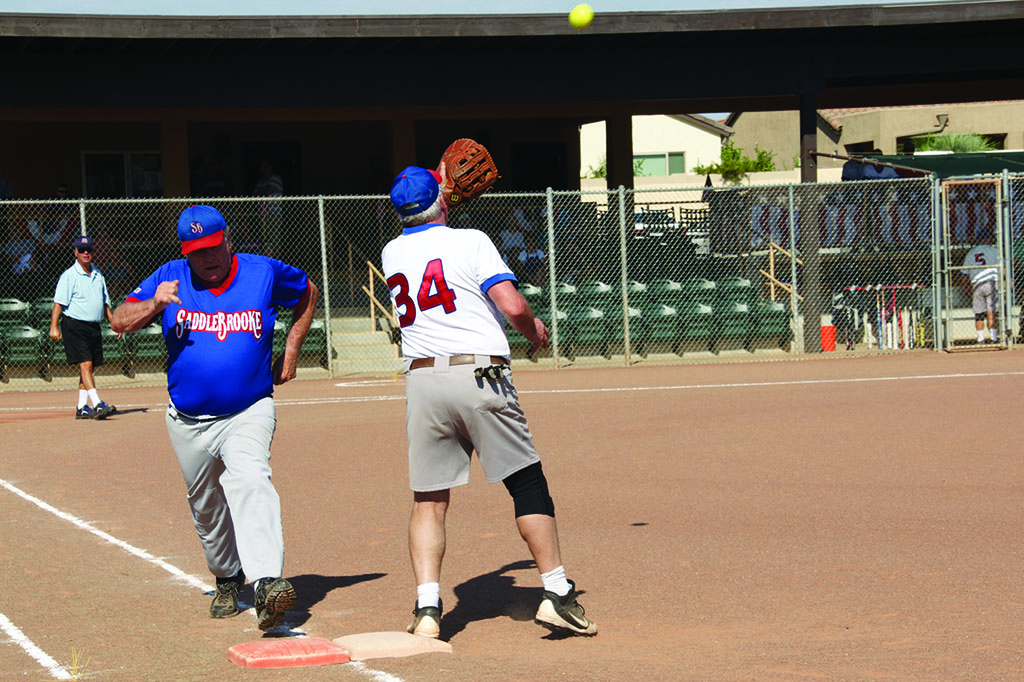 This play at first base is gonna be close; photo by Janet Jarzembinski.

It was a labor of love for all at SSSA to serve you.

Food was served, too! Thanks to our tournament sponsor Jeff Johnson with Merrill Lynch for supporting SSSA and the fans and to Doug Wagers of Window Wizard who once again grilled up the grub on his Louisiana Cooker.

Game one was close—for a while. Both teams scored one in the first and five in the third inning. But in the fifth, the white shirt Sheftel Associates sponsored team, managed by Tim Benjamin, scored four. The blue shirted SaddleBrooke Remodeling team of Paul Jarzembinski’s bats went to sleep after the third and they lost 13-7. Batting stars for the winners included Jerry Wilkerson 4/4, both Greg Morgan and Don Colen had 2/3 plus a walk and Debbie Seguin with a double and a triple. Lead-off hitter for the blue shirts, Jeff Raynor, went 3/4.

Game two was close at the end—but not in the middle. Harold Weinenger’s Shelves That Slide team in blue took a 10 run lead through 2 1/2. Bobby Carbone’s white shirt Shifren Physical Therapy got five of that back in their three, but the blues, with five in the top of the fifth stretched it to 10 again at 16-6. Shifren clawed back with four in their fifth and five in the sixth. Enter the seventh and final inning, Blue 16 – White 15. Alas, blue scored one and white scored none. Final Shelves 17 – Shifren 15. Batting star of the game was Leonard Gann. He hit a first inning double and then a home run out of the ballpark and into the dog park in the third for the losing white shirts. After that the blues pitched him junk walking him twice. Tim Ward also went 3/3 for the losers. The winners had a homer by Greg West (2/2 plus walk) and a triple by Rick Ervin (3/4) and 3/4s from Bruce Fink, Rick Keagy, Joe Passoni and John Lauder.

Game three was so close it went into extra innings! Paul Butler’s blue team, sponsored by SaddleBrooke HOA 1, led off with a four run first, then a three run second. Debbie Seguin’s SaddleBrooke R Us white shirts caught up in their third and then slowly pulled out to be ahead 9-7 by the fourth; 11-8 after six. The blue had a three run seventh to tie. Now an eighth inning: blue scored one in the top; not enough, as a bases loaded single by Dennis Skoneczka drove in two for a walk-off 13-12 win—very exciting! Highlights included great outfield catches by Terry Mihora (he also hit 5/5) and a diving thriller by Dom Borland.

SSSA’s next tournament will be on Saturday of Thanksgiving weekend.