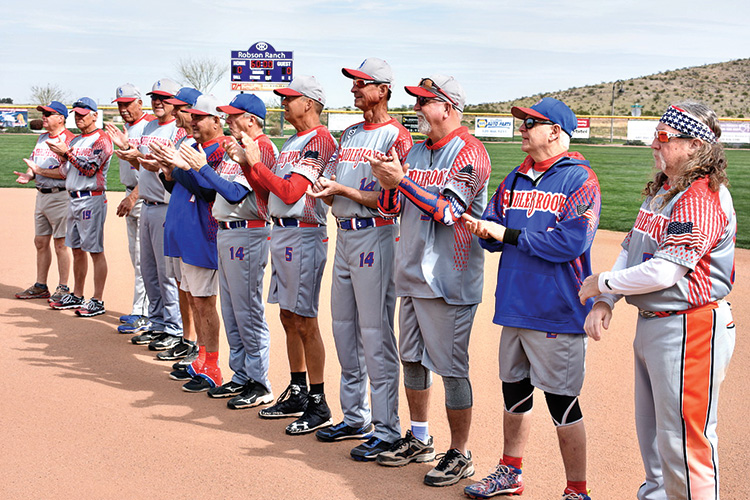 The best of SaddleBrooke Senior Softball beat the best of, well, almost everyone else.

In a five team, two-day tournament hosted by Robson Ranch at their impressive field in Eloy, Feb. 21 and 23, the SaddleBrooke team won three of four games, good for a second place finish.

The 12 players who competed were selected from the competitive league, the strongest of the five leagues at SaddleBrooke.

Tournament competition was a new experience for many of the players. Very few SaddleBrooke softball members play tournament ball, so this was different. There was no riding golf carts to our field to play against friends and neighbors whose strengths and weaknesses they know by heart. Instead, the team drove as a group to Eloy and played against new faces and better competition in a different venue in front of bigger crowds. The other teams also had the advantage of playing together as a group all winter while our squad was a collection of players from three different teams. Plus, community pride was at stake.

Our boys came through. SaddleBrooke won both of its games on the first day of the tournament. On an overcast, windy day, they beat a team from Robson Ranch 10-5, scoring six of their runs in the last two innings. Mark Adolph had a clutch two-out double, driving in three runs in the fifth inning, and made two outstanding catches in the outfield. Tim Ward added three hits, Lee Leksell two. Dave Bohlman pitched masterfully.

In the second game, SaddleBrooke beat a team from Mesa 20-15. Key hits included a two-out, two-run single by Charlie LaNeve in the first inning, a three-run single by Len Gann in the fifth inning, and a two-run double in the last inning by Mark Hojnacki. Gann led the offense with four hits, supported by three hits apiece from Hojnacki, Steve Laureys, and Brand Eigen. Bob Chesney and Eigen made nifty catches in the outfield.

On the second day, the team again made the 60-mile drive northwest to Eloy under some blue skies. They lost to the eventual tournament winner, an excellent team from Casa Grande, 12 to 7. Hojnacki was the batting star with three hits including a three-run homer over the fence, 300 feet from home plate.

On the last game of the day, our guys beat a second team from Robson Ranch 14-7, clinching second place in the tournament. Lynn Laureys had two hits plus a three-run homer over the fence. He was aided by baby brother Steve, Adolph, and Eigen, all with three hits. Outstanding defensive play by the outfield including Terry Mihora, Adolph, and Eigen limited the Eloy team’s offense as did Rick Keagy’s pitching.

Manager Hojnacki summed up the team’s two-day play, saying, “We played hard and well against really good competition. Our defense was outstanding and we had some clutch hitting. The tournament was a great experience for our guys and we look forward to playing in future ones. I think we did SaddleBrooke proud.”

The SaddleBrooke Senior Softball league is currently in the latter part of its 15-week winter season. The men and women play Monday through Friday in leagues based on ability. There are 25 teams playing 14 games a week this season.

Games are played year-round. There are four annual holiday tournaments, including Memorial Day in May. The league is celebrating its 15-year anniversary this season; its first game was played May 17, 2005.

If you are interested in playing, volunteering, or simply watching the games, go to saddlebrookesoftball.com to learn more.