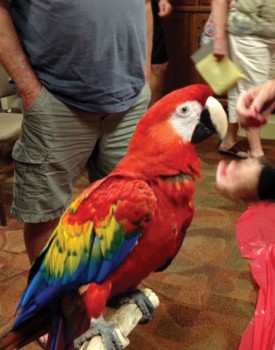 SaddleBrooke Nature Club had a colorful and very vocal guest speaker! Sedona, a five year old Scarlet Macaw, with her owner Kelly McGalliard, was here to tell us of the Macaw’s history in the Southwest and future in Central and South America.

Ms. McGalliard began raising birds when she was a child. As an adult she was drawn to the Scarlet Macaw and returned to Tucson to study the bird and its rich history.

As early as 600 A.D. Scarlet Macaws were brought to the southwest from Mexico to trade for turquoise. Archaeologists have found skeletal remains of macaws particularly in the area of Sunset Crater in northern Arizona.

Today the Scarlet Macaw is threatened with extinction in Mexico and Central America. Nesting platforms as high as 75 feet are being built to encourage the birds to return and populate their native Mexican range. They are found in greater numbers in South America.

Kelly McGalliard is the founder and director of a nonprofit called Rise of The Phoenix Foundation. It’s a charitable organization devoted to educating the public about Scarlet Macaws and providing funds to care for the birds in the wild. The group’s website provides extensive information and references about the bird; www.riseofthephoenix.org.

Macaws mate for life and are seen in pairs or family groupings. The babies remain with their parents for up to two years. Females are larger than males in this species but they are otherwise indistinguishable.

Sedona, while stunning, is not a pet for rookies. Her screech could be heard throughout the SaddleBrooke One Clubhouse, bringing Bingo players downstairs to peak in the Coyote Room to see what the racket was about. Her beak is powerful and can strip curtains or kitchen cupboards in an afternoon. She is a very high maintenance pet who will most likely outlive her owner.

SaddleBrooke Nature Club is on summer hiatus. The first meeting in the fall will be October 12 at 4:00 p.m. in the Coyote Room when a speaker from Tohono Chul will be talking about Ethnobotany. A field trip will be arranged to further study the topic at Tohono Chul.

There are still a few openings in the November trip to the Hopi Nation with Roads Scholars. Contact Carole Chase 520-818-0715 for more information.

Check with the SaddleBrooke Nature Club website for more information about the club and future programs; www.SaddleBrookeNatureClub.com.