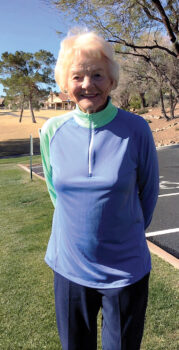 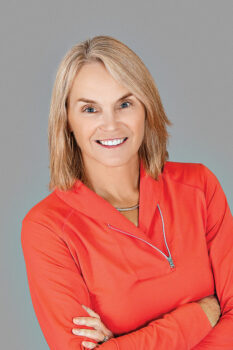 The President’s Cup, a match play event, was finalized on Feb. 2. In the consolation match, Lee Anne McClelland won over Nancy Sartor; in the Championship match, Marie Kahng went against B. J. Murray, the eventual winner of the 2021 Presidents Cup. Congratulations to these ladies!

Fifteen of SBWGA-18’s and the Niner’s players went on a Kachina Dolls’ outing to Skyline Country Club on Feb. 15. Bonnie Stutzman was part of the winning foursome.

Awards were given to those whose balls landed on the green of Tucson 2: Ann Chatham, Nancy Sartor, and Barb Turriff. Closest to the Pin on SaddleBrooke 6, a par 3, awarded by our sponsor Fairway Cooling and Heating, went to Takeyo Eakin, whose ball rested only 3 feet 3 inches from the hole.

There’s not a homely girl “in all them hills” around SaddleBrooke. Nevertheless, for our Sadie Hawkins competition, our ladies asked gentlemen golfers from SaddleBrooke One or SaddleBrooke TWO to be their partners. Sponsored by Coyote Golf Cars and chaired by Deanna McCann, the first place winners of the tournament played on Feb. 23 were:

Youth On Their Own (YOTO), the designated charity this year of SBWGA-18, again came out a winner. All of the Sadie Hawkins players who bought mulligans and additionally donated resulted in the giving of $410 to YOTO. That’s a big thank you, y’all!

Coming up in mid-March is our simultaneous competition of the Cactus Classic and the Club and Senior Club Championships.

Golf salts our recreational lives at SaddleBrooke. We endure the occasional cold golf day, because we’re happy that we don’t have to salt our driveways and streets to move around.