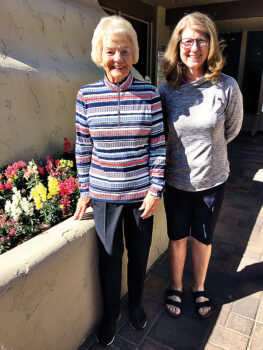 After the holiday season of 2020, SaddleBrooke Women’s Golf Association-18 (SBWGA-18) welcomes in the new year of 2021 with a new series of weekly games on Tuesday mornings, our regularly scheduled event and meeting days. The Tuesday Play Day Committee already has a full complement of games planned.

Our Special Tournaments Chair, Reva Stolpe, begins 2021 with another major tournament—The Presidents’ Cup. Not associated with the biennial international PGA tournament, SBWGA-18’s Presidents’ Cup is a match play tournament. The winners of matches between two players, one from both sides of a roster previously determined by Reva, go on to the next round, until the ultimate match is played between the winners of each side. The matches begin in late January, with the final match in early February.

Also coming up in January, SBWGA-18’s Gross and Net Overall Ace of Ace’s represent SBWGA-18 in the State Medallions Tournament held in the Phoenix area. Our ACE Day of December 2020 was played only by all the monthly Low Gross Score winners and monthly Low Net Score winners.

However, due to prior commitments, neither Molly nor Nancy can play in the State Medallions Tournament. Our second place winners, Judy Melo for Gross and Jean Molitor for Net, will represent SBWGA-18 in Phoenix.

SBWGA-18 looks forward to a full year of golf, a game that brings us together in friendship. We also wish to extend our heartfelt congratulations to Jane Chanik, newly named Head Golf Pro for SaddleBrooke One Golf.