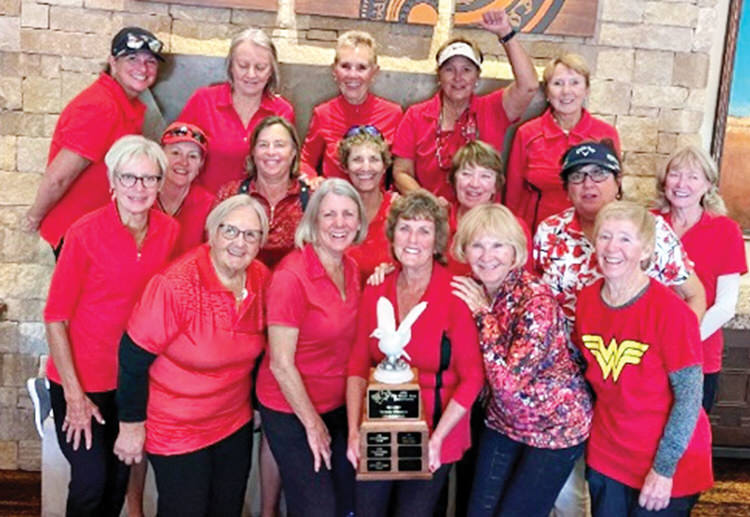 The 2022 Desert Dove Tournament was held at Robson Ranch Golf Club in Eloy. This tournament has an impressive history, having been held for more than 20 years, formerly as an EWGA tournament. Eighteen Wonder Women from Tucson competed in a match play event against 18 Super Girls from Phoenix. Although the day began a bit chilly, it turned out to be a gorgeous, sunny day, full of great golf, wonderful camaraderie, and a fun lunch.

The competition was fierce, and the match was very close, but in the end, the Tucson Wonder Women took home the beautiful Desert Dove trophy!

The format was match play. There were 28 ladies on each team with 14 partner matches. Competition included a 9 hole scramble, a 9 hole modified alternate shot, and two 9 hole net best ball events.

The Country Team won 247 to 221 strokes. Although both teams had choreographed dances to start the event, the winning Country Team performed at the December luncheon.

On Dec. 6 the SBWGA-18 members participated in the annual Beat the Pro and President event. Two-person teams attempted to beat the score posted by the pro Jane Chanik and Nancy Sartor who played in place of Anne Stonecipher.

Thanks to the outgoing SBWGA-18 board members, with special thanks to President Anne Stonecipher’s leadership in 2022.