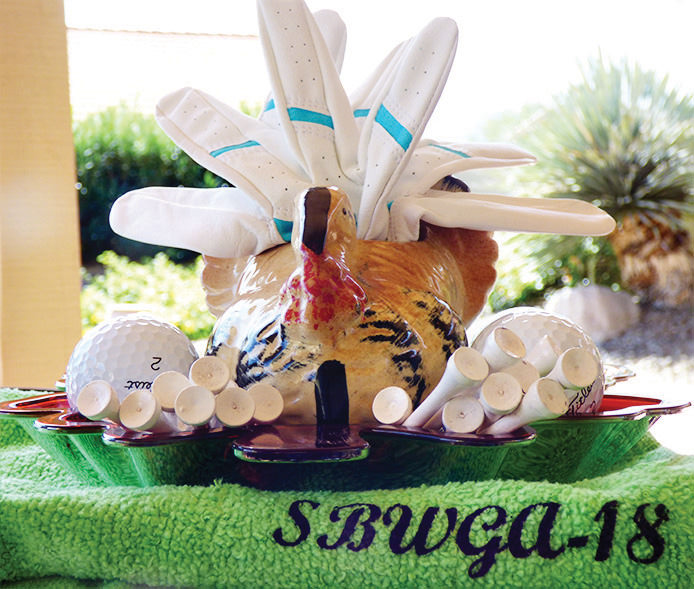 Let’s talk turkey. It’s about time, Thanksgiving, that is, and the holidays in December are close behind. Schedules for cooking the turkey must be set, and side dishes and desserts, ranging from pies to plum puddings to cakes, have to be selected from families’ treasure troves of recipes. With so much to accomplish during the holidays, sometimes one has to break away and relax playing golf.

Our sponsor, First Inspection Services, a pest control company, awarded the honor of Closest to the Pin to Sandra Murray, whose tee shot on Catalina number 3 cozied up to the cup to a length of 17 feet and one inch. Congratulations to all the winners on Oct. 12!

After their rounds, our players hurried back to The Vistas at the clubhouse for hot coffee, tea, lunch, and the October general meeting. Following the league’s bylaws, President Carol Bidwell announced the nominated slate of new officers for 2022.

Have you ever wanted to throw out your worst three holes? On Oct. 19, our members did just that. With net scores for 15 holes, relative to par, the following ladies claimed prizes. Flight 1: first Becky Hubbard, -2; tied for second with +2, Brenda Brown and Maire Ryan. Flight 2: tied for first with an even score, Connie Culley and Eila Sallaberry; second Lynn Stewart, +1. Flight 3: tied for first with -4, Barb Verbus and Ann Stonecipher; third Bonnie Westra, -3. Flight 4: first Ann Running, -2; second Nancy Huffman, -1; third Reva Stolpe, even. Flight 5: tied for first with -3, Audrey Costello and Linda Watkins; tied for second with an even score, Cathe Kropp and Barb Katz.

Prizes for low gross by tee box on Oct. 19 went to Helen Graham, gross 83 from the red/yellow tees, and to Carol Bidwell, gross 91 from the red tees. Closest to the Pin, sponsored by Lexus of Tucson Auto Mall, went to Jo Ann Ellison, whose tee shot braked only nine feet, six and one-half inches from the cup. Congratulations to all the winners on Oct. 19!

Upcoming events are ACE Day on Oct. 26, the election of new officers at the Nov. 2 luncheon and general meeting, and the return of SBWGA-18’s version of the Solheim Cup on Nov. 16 and 18.

Festivities will fill many of our days in November and December, yet there’s a lot of golf left in this swiftly passing year of 2021. May your celebrations be merry, and teeing over the water on SaddleBrooke TWO, may your golf ball always make the carry.