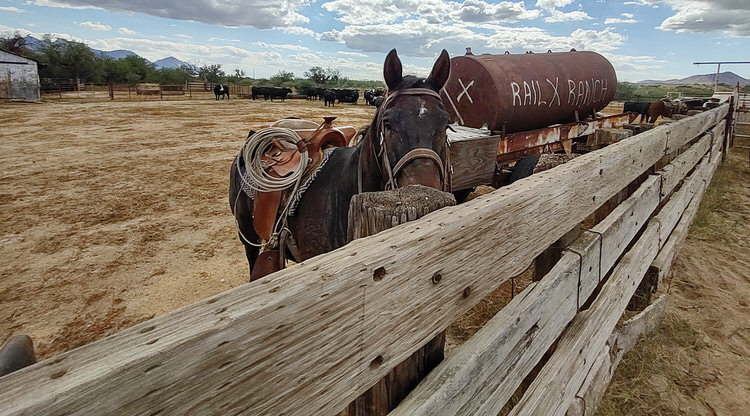 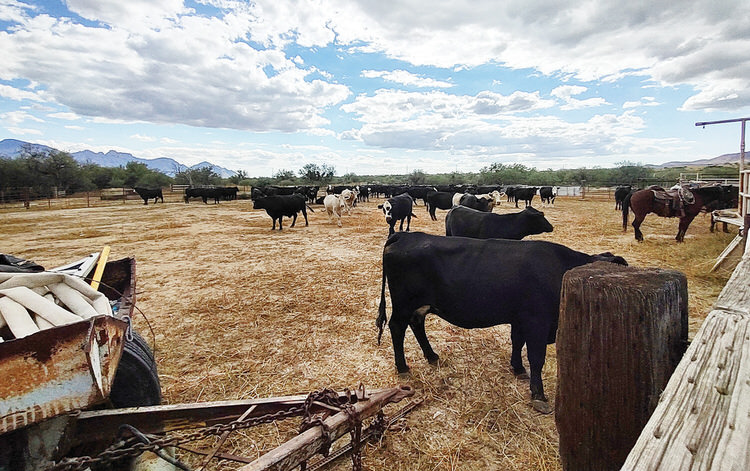 Some things change; some don’t.

SaddleBrooke drivers exiting via SaddleBrooke Boulevard see a new landmark on the great valley landscape below the Tortolita Mountains. Appearing, depending on the light, as a dark gray or shiny silver slash embedded in the desert floor, the Chirreon solar photovoltaic power plant’s 90 acres should power about 3,000 average residential homes, many in SaddleBrooke. For Trico Electric Cooperative, it is a herald of the coming age of clean energy.

For the historic Rail X Ranch, with its approximate 25,000 acres of leased State Trust land, it is a slight inconvenience—new fences and a few altered trails. Ranch rhythms continue mostly unaffected.

In mid-October I received an email from family owner Matt Martin inviting me to stop by while the fall roundup was underway. By my arrival mid-afternoon, his team of about nine men and one young woman was working a small wire-fenced corral containing some 25 black calves while, in an adjacent pen, five big Angus bulls stood placidly. In a more distant corral, the calves’ anxious mothers bawled their worries.

On a big red horse, Playboy, Matt set a fast pace for the others who remained on the ground. Roping the back legs of a calf, he secured the rope while his horse dragged the 150- to 300-pound animal some 40 to 50 feet through dusty, soft earth to the propane-fired stove, which heated straight branding irons. The crew moved quickly, two securing the prone animal’s feet and head, another burning the Rail X brand on the left ribs while another cut the registered ear markings, and yet another vaccinated with a large hypodermic needle. For young bull calves, the castration procedure did not slow the overall pace, which must not have exceeded five minutes per calf.

Over a three-day period, this tough and down-in-the-dirt process would be repeated until each sector of the ranch had been rounded up and the branded animals returned to grow to feeder size (some 600 to 800 pounds) in the spring. One big concession to technology these days is the use of a contracted helicopter to help round up the cattle. It used to take 12 hard days with a five- or six-man crew, but now it can be done in three. This accommodates the limited times today’s part-time cowboys have available. One of this year’s crew has a construction business, another is a custom firearms maker, another an artist, and yet another is a rancher who also owns an Airbnb.

One of the ranch’s oldest sections (Los Barriles) has weathered adobe structures, a windmill, corrals, and water tanks dating to a 1920 homestead. Ranch headquarters off Edwin Road are maintained, but structures are also showing their age. Matt Martin, recognizing the long history of development moving inexorably northward from Tucson, recalls the attitude of his father when interviewed on the ranch in 2008, “Whatever will be, will be.” The Rail X quietly continues its proven western ways. “Mountain oysters, anyone?”