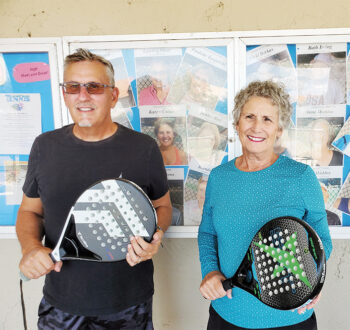 Landon and Karen in front of pictures of new members.

“It’s the people,” was the response that both Landon Sheat and Karen Simmons gave when asked what they enjoyed most about POP Tennis. Landon said he enjoyed it because it seemed to be less competitive than tennis. Karen also enjoys getting out and said she just enjoys the sport.

Landon is also active in tennis and has signed up for softball. He warned those new to POP Tennis to be wary of running backwards to return a shot. He added, “Good tennis shoes will help with traction.”

Karen agreed that athletic shoes with good traction are a must and suggested to not run backwards to return a shot. If you are fast enough, you can turn and run around the shot and return it on the bounce, or just let it go.

Landon Sheat would like to start a men’s organized POP Tennis group, if anyone is interested. He arrived in SaddleBrooke from Florida and enjoys SaddleBrooke life while maintaining two businesses from his home. He was introduced to POP Tennis by his visiting brother-in-law, John Stedronsky, who really enjoys the sport. Landon has quickly learned the sport and has become one of those who returns every shot. He is competitive in a friendly way. Baking is one of his hobbies, and he is rumored to make a keen key lime pie.

Karen Simmons thanked Fran Meckler for forming a drop-in Pop Tennis group for those who never played the sport and wanted to learn. Karen enjoys water aerobics and is a member of a group that designs and makes birthday cards and cards for all seasons. Her husband, Roger, is also a good POP Tennis player, and they make a formidable team. They traveled a lot due to Roger’s job with the military. They most recently came to SaddleBrooke from Colorado. 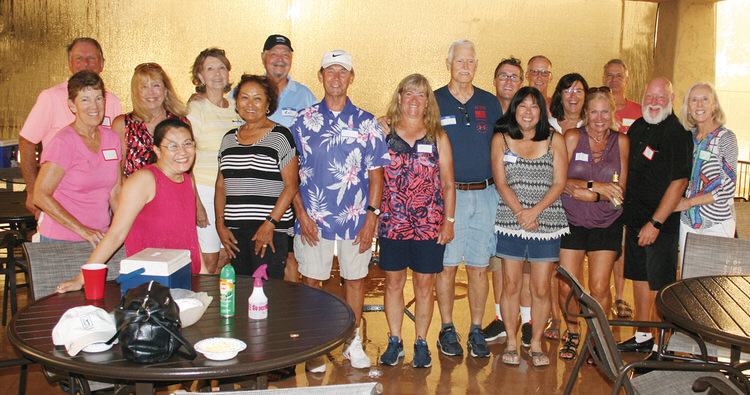 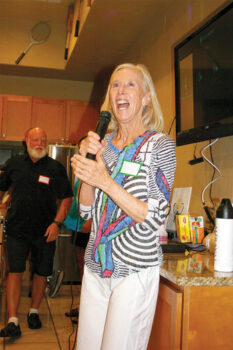 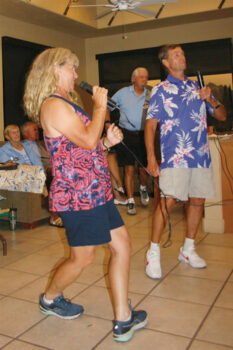 Mike Dunbar was the brave DJ who brought his karaoke equipment to the tennis patio on the night of Sept. 6. Yes, the night of the biggest storm ever at SaddleBrooke! Everything was set up and ready to go on the patio for our 6 p.m. gathering of tennis players and guests. However, the weather had other ideas, and the wind, rain, and hail came suddenly. No problem though—we moved it all indoors to the office and let the good times roll.

It was understandable that not everyone wanted to venture out in that storm, but we did have approximately 30 determined souls. It was a memorable night for sure. We saw talents beyond tennis skills that one never knew our tennis players had. There are videos to prove it too!

Our own tennis pros proved they have other talents. TJ Duffy shared his passion for photography with the club and captured memorable moments. Mike Dunbar not only provided all the equipment for karaoke, but he was quite the entertainer and singer. Chris Madsen surprised us with his vocal talent and sang more songs than he originally planned (maybe some adult beverages helped?). Gene McGeehan (nicknamed “Dancing Machine”) did some dancing with his wife. Other tennis players, like Sharon Gartner and Tracy Reingruber (who also sang with her husband, John), were the Rockettes, while Bill Nagy sang “New York, New York.” Larry White and Zoli Nagy from the Singing Saguaros belted out some songs with their great voices, putting us all to shame! Shannon Doyle arrived a bit later due to the storm, but he added to the fun by singing quite a few songs. Towards the end of the evening, we all sang “Hallelujah” in tribute to 9/11.

The fabulous part of the night was not just singing, but a dessert bar organized by Cindy Madsen, Sandy Stettler, and Diane Poling, along with flavored coffees. The Madsen’s set up their old-fashioned popcorn machine, and Chad Stettler made homemade vanilla ice cream. Thanks to volunteers like Shirley Dunbar and Greg Poling, who helped out in all areas to make this a special event. It was certainly a night to remember, in many ways.

Thanks to the SaddleBrooke Tennis Club members who make our club special, and to our board for supporting our activities. 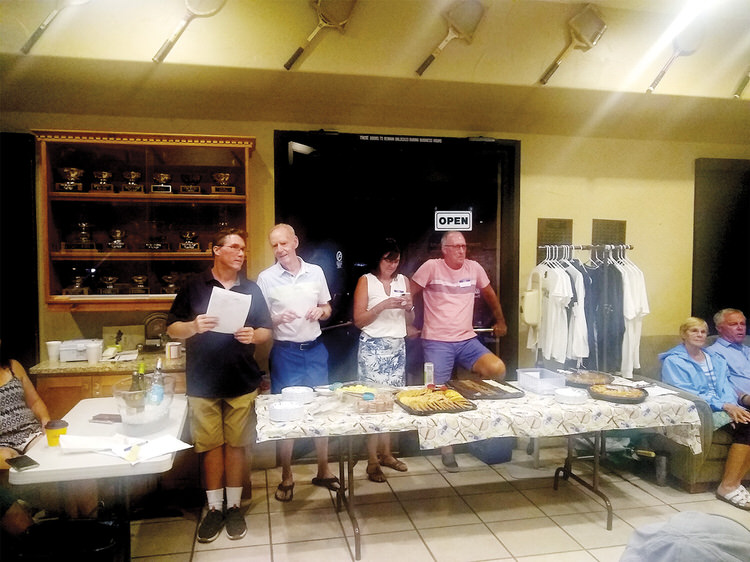 The SaddleBrooke Tennis and Pop Tennis Club (STC) hosted a Labor Day karaoke night social for all STC members and their guests. The event was on Sept. 5.

It was a special night, highlighted by a September storm that all of us will not soon forget. We started on the tennis building patio, but not long after the social began, everything and everyone moved indoors.

As the storm was roaring outside, those of us attending had a great time singing our favorite tunes. The DJ for the event was Mike Dunbar, and he did a great job keeping the singing on track. It’s always fun to see tennis club members off the tennis court and in a different venue. I’m not sure we found folks that will be on American Idol, but many of them are talented singers, and it was fun to watch and listen.

The club provided a dessert and coffee table. I thought the ice cream and pie was terrific!

We would like to thank the club for hosting and thank Cindy Madsen and Debbie McGeehan for all their work in making the event go smoothly.