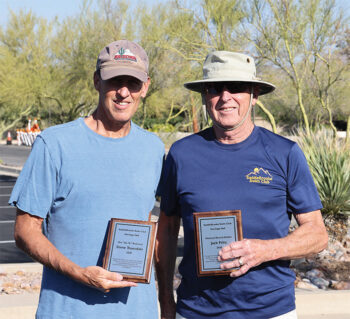 On Nov. 18, 2020, the annual fall Swim Club meeting took place in the lower MountainView parking lot and due to COVID-19, we were able to spread out arriving by golf carts, automobiles, bikes, or walking. The meeting got underway with our new club president, Lyn Moreno, presiding. The minutes and treasures report were approved and seconded. Other new club officers are Jeanie Polak, vice president; Rick Vieth, secretary; and Joan Pierce, treasurer. Our new swim coach, Terry Heggy, was introduced and gave a nice talk on his happiness to find SaddleBrooke after leaving Colorado and taking over the responsibility of coaching our team.

Next on the agenda were the awards that were given out to our All-American swimmers, which brought our number of All-American swimmers in the club to 40. All-American means the fastest in the U.S. for that year in that age group. The recipients in the Short Course Relay were Bev Schulz, Jack Fritz, Lyn Moreno, Jim Spiegel, and Doug Springer. Short Course Yards Relay recipients were Glenn Tewksbury and Doug Springer. Long Course Meters Relay recipient was Jack Allison.

Next, the Heritage Hall recipients were announced. It is the highest honor for SaddleBrooke swimmers to be inducted into the Heritage Hall and they are individuals who have dedicated outstanding times and service to the club. This year’s honorees were Steve Truesdale and Jack Fritz.

The last important business was to thank our coach Doug Springer for his 17 years of service to our club. He was the founding father of SaddleBrooke Swim Club and was instrumental in getting the DesertView pool built to competitive standards by many meetings with the Robson team. He has turned over his duties to our new head coach Terry Heggy, plus many other coaches already on the swim team. Doug and his wife Nancy were presented with a beautiful art piece created by our own swimmers Terese Butler and Candy Armstrong. Phil Simpson, 2018-19 president, gave a wonderful talk recapping all the years Doug gave to the club.