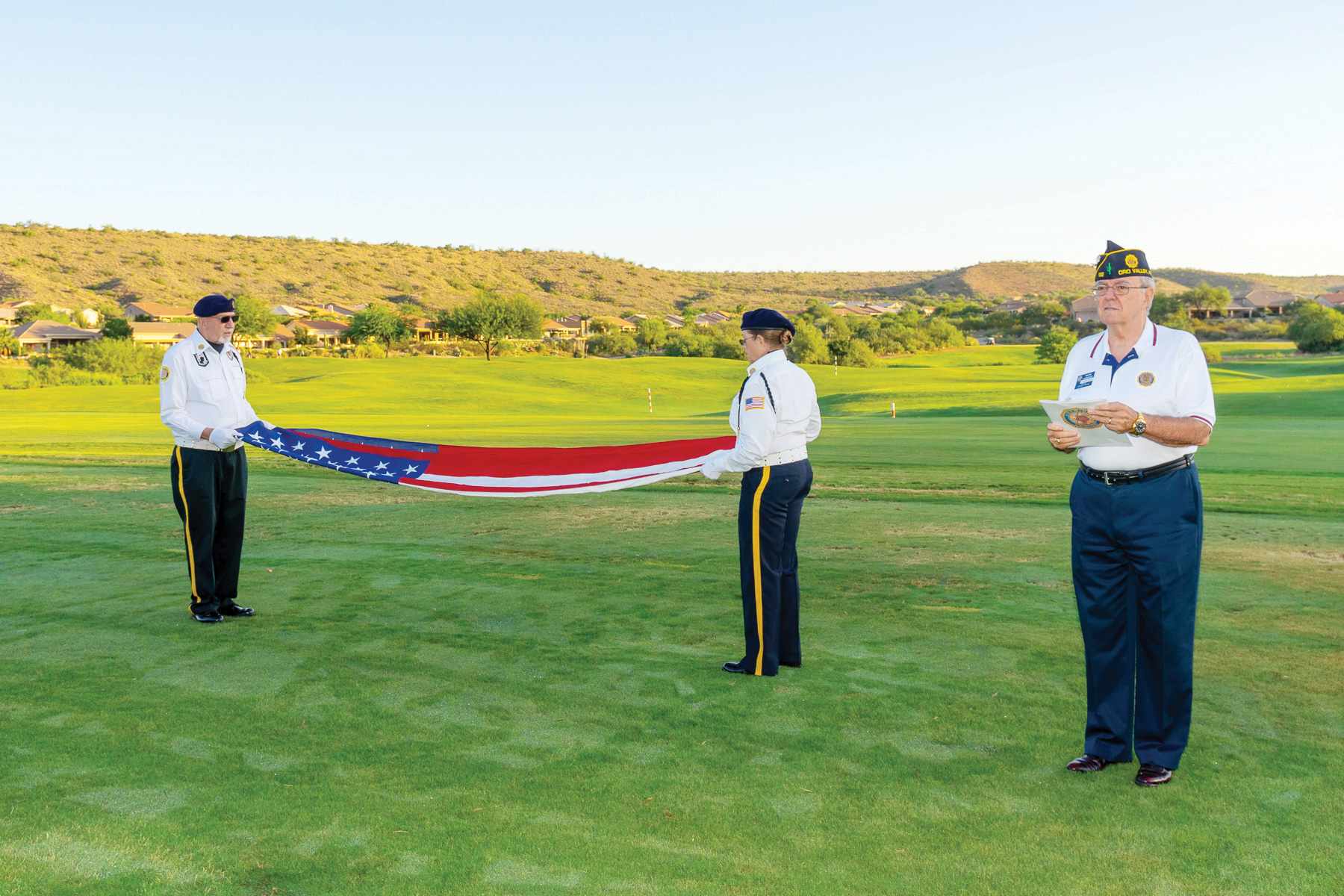 A beautiful morning eased in as Commander Wayne Larroque and members of the Oro Valley American Legion paid tribute to our military families prior to the Patriotic Golf Day event. (Photo by Bill George)

In the dawn’s early light of Sept. 7, the Oro Valley American Legion Post Color Guard honored our veterans with a rifle volley and flag folding ceremony as Commander Wayne Larroque read the meaning behind each of the 13 folds. As daylight spread gently across the MountainView Golf Club, patriotic citizens stood with hand on heart as the crystal-clear voice of SaddleBrooke resident Monica Gray led our national anthem. This touching tribute was the perfect start to a day dedicated to showing support for our veterans’ families and our humble gratitude for the price they have paid so that our star-spangled banner still waves o’er the land of the free.

Folds of Honor (FOH) has a single noble mission—to provide educational scholarships to spouses and children of America’s fallen and disabled service members. Its motto is “Honor their sacrifice. Educate their legacy.” Since inception in 2007, FOH has awarded over 24,500 scholarships throughout all 50 states, and in 2019 alone, awarded over $24 million in scholarship support. Patriotic Golf Day is the primary fundraising event of FOH. As our wingman, Mike Karpe, assistant golf pro, ensured MountainView was the first club in the state to step forward to answer the call for what turned out to be the largest amount raised in one day for FOH in Southern Arizona’s history.

Patriotic Golf Day is near and dear to the heart of Mike, who calls it “his special way to give back.” Months of Mike’s planning and preparation, backed with full support and work effort by Matt Hudson, director of golf operations, and Donna Yon and Karen Wilson’s team of stars from the women’s golf league, made it a record-breaking day. This is the third year Mike has organized Patriotic Golf Day for our community and each year the money raised far exceeds the previous year, and soars above the goal. Money was raised through cash donations; 100 raffle prizes gathered by Donna and Karen from local merchants; a generous, anonymous donor pledging $2,500 in raffle ticket match; entry fees for 136 participants; many generous and loyal sponsors who donated financially or through product; hole sponsors; and Mike’s online silent auction which included items such as VIP Club Fitting at Callaway and a four-night stay at The Ridge in Sedona. The guy with the big heart will have to set an even bigger goal next year, because in 2020, enough money was raised to change the lives of six military families with college scholarships, and the amount going directly to Folds of Honor was over $30,000!

The first of 34 Patriot Golf Day teams, clad in their red, white, and blue spangled attire, in carts decorated with stars, stripes, and banners, began play at 7 a.m. on the front and back nines. They were equipped with a pin bearing FOH’s logo, the folded flag displaying six shining stars; a box of blue and red patriotic Callaway Chrome golf balls; and hearts full of pride and gratitude. The 4-person, pick your team scramble scores ranged from 57-77. Team Matt Kambic, Dan Nordhill, Scott Davis, and Bruce Fink took first place. The 2-way tie for second place, with a score of 58, were team Tim Ward, Tony Van Natter, Doug Anderson and Al Bolty; and team Tim Davis, Tom Herrmann, Loren Olson, and Joe Peel. These fundraising golfers enjoyed some good old friendly competition chasing after 18 red, white, or blue flags, knowing the real prize was living in freedom under the one red, white, and blue flag. As all money raised went directly to FOH, they settled for just seeing their name in the paper, and the joy of being able to pay a little back to the families of the 1% who protect the remaining 99%.

Many thanks to Ron Diaz, local representative of Morgan Stanley, our title sponsor. Our appreciation to Bill George, our resident photographer, whose familiar face has been seen around for years as he preserves the history of our events. We are grateful for our ever-friendly golf staff who patiently get us organized, and the team of Paul Hallock, Golf Course Superintendent, for working so hard to maintain our courses during this weather-challenging time. And, of course, no event would be complete without the wonderful lunches and service of our MountainView Bar & Grill, who on this day whipped up turkey-cheddar wraps and those famous homemade cookies.

In this great, but troubled and divided nation, we remain united in our desire to preserve the rights and privileges that go with our freedom. We remain united in knowing what it will take to continue to preserve what others died for, are fighting for now, and will vigilantly continue fighting for in the future. We salute our flag, the symbol of unity, thank our lucky stars for the blessing of living under that flag, and show our stripes through support of military families. Alongside Mike and Matt, SaddleBrooke stands with Folds of Honor.