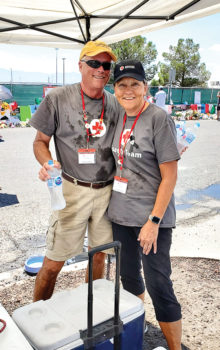 Texas Governor Greg Abbott called it “one of the most deadliest days in the history of Texas.” On a Sunday in August, a gunman walked into a Walmart in El Paso and opened fire, leaving 22 people dead and 24 injured. In response to the carnage the American Red Cross went into action and deployed volunteers to assist its local workforce to assist the residents. Two of these volunteers, Laurel and Terry Parrott, live right here in SaddleBrooke.

Most recently before coming here, Terry, a retired engineer, and Laurel, who has her Master’s Degree in education, owned and operated a bed and breakfast in Kalamazoo, MI for about eight years. Laurel had volunteer experience as a court appointed special advocate (CASA) and a tutor of adults in an English as a second language course, and the couple were interested in becoming disaster volunteers. After retirement they set their sights on volunteering with the American Red Cross.

Their journey began by filling out an online Red Cross volunteer application. Depending upon the applicant’s choice of the volunteer role that he or she wants to perform the applicant is scheduled for training accordingly. The training can be in the form of in-the-classroom classes, online training, and/or in a virtual classroom. After the training or classes, tests are given so that all volunteers have a solid understanding of their role with the Red Cross.

In Terry and Laurel’s case, they first received training to become local disaster assistance team (DAT) responders, typically called out to assist residents displaced after a house fire. Later, they took on more training to be able to deploy out of the local area to assist with sheltering and feeding people affected by large disasters like hurricanes, fires, and floods. They qualified to work in shelters and became certified emergency response vehicle (ERV) drivers. They were also trained in CPR, first aid, and in the use of an automated external defibrillator (AED).

The Parrotts’ first out-of-Arizona volunteer assignment was in November 2018, in Panama City, Florida after Hurricane Michael, where they worked in a shelter helping people displaced by the devastation. Their two-week assignment included Thanksgiving Day.

But their most recent deployment was to El Paso. Because this deployment was considered a mental hardship assignment, Red Cross management did pre- and post-deployment mental health checks with volunteers, and checked on volunteers while on the scene. While it goes without saying that their El Paso deployment was difficult, both Terry and Laurel say the rewards of being there, helping, and interacting with a community in distress, outweighed any hardship.

Volunteering for the Red Cross may entail 12-hour days and intense work but the Parrotts call it extremely rewarding. When asked why they have taken on their volunteer responsibilities with the Red Cross, both Terry and Laurel responded, “We are so blessed. We want to give back.” Terry and Laurel, we thank you for your selfless dedication and volunteerism.

Red Cross volunteers help respond to an average of more than 62,000 disasters every year. To learn more, go to www.redcross.org.