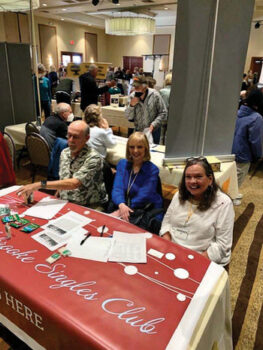 The SaddleBrooke Singles Club offers a low-key environment for socializing with others who are similarly situated. In addition to our very popular, weekly happy hour, in which we meet in one of the SaddleBrooke clubhouses for drinks and dinner, the group attends events in members’ homes, dines at local and not-so-local restaurants, has gone on hikes, and is looking forward to speakers on topics of particular relevance to our age group, such as how to preserve financial security and good health, among other activities.

On New Year’s Eve, several members went to the Gaslight Music Hall to watch the Edwards Twins, celebrity impersonators, perform their annual holiday concert. Everyone had such a great time that the decision was made to return on New Year’s Eve 2022.

The club’s booth at the Activity Fair on Jan. 22 had many visitors. Thanks to Ray Peale, Walt Mercer, and Barbara Barr for their enthusiastic representation, which resulted in 16 people signing up, several of whom have already attended a happy hour. (Interestingly, there were several married people furtively inquiring about the club, perhaps anticipating a status change.)

We are planning a dine-around later this month at Red Lobster, and many of us are looking forward to one last opportunity to have the Wednesday surf and turf special before the location is rumored to close as a result of the Oro Valley Marketplace’s redesign. As the weather warms up, one of our members is planning a putting and pinot event to celebrate his newly installed putting green, and we are planning a day trip to the Pima Air and Space Museum in April. Several other events that had been put on hold due to the Omicron surge will (hopefully) be reinstated as soon as the weather cooperates and they can be held outdoors.

If you are single in SaddleBrooke and would like to meet other fun and vibrant people, please join us at our weekly happy hour, Fridays at 4 p.m. Happy hour has become quite the hot ticket, with the number of attendees often straining the seating capacity of the SaddleBrooke dining establishments and causing overwhelmed Food and Beverage staff to question their career choice. During odd months (January, March, May, July, September, and November), we meet for drinks and dinner at the SaddleBrooke One Clubhouse, and during the even months (February, April, June, August, October, and December), at SaddleBrooke TWO in the MountainView Clubhouse. Some members also attend happy hour at the Preserve (on the patio during the warmer weather and inside when it is colder). As all clubhouses have been subject to temporary closings and/or prior bookings, check first before attending. For more information, contact Hazel Staloff at [email protected]