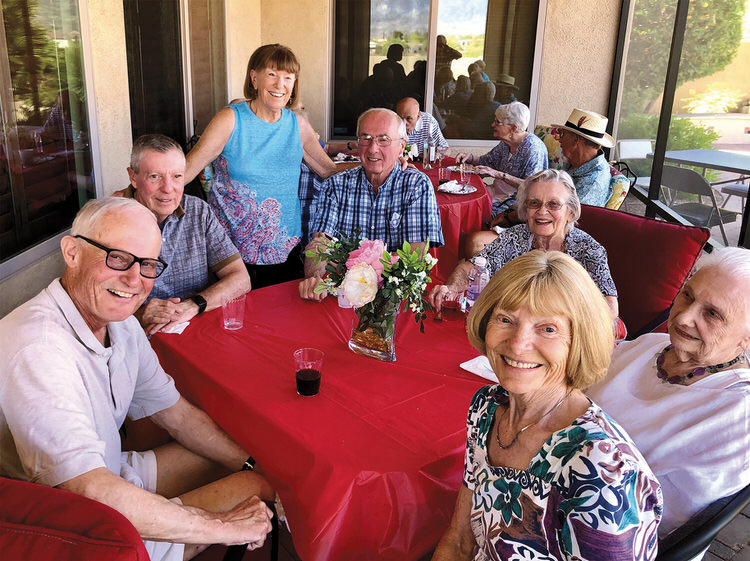 Singles Club members enjoying a potluck on a patio.

Members of the Singles Club enjoyed a busy social season, comprising a dine-around at Mi Tierra; holiday gatherings at SaddleBrooke, celebrating Cinco de Mayo during the unseasonably cool (for Tucson) May weather and July 4 in which a monsoon, not uncommon during SaddleBrooke’s summer of 2021, threatened (but did not prevent) the fireworks display; a Party Like It’s 2019 potluck, commemorating what we believed was a completed vaccination process, only to discover months later that the Sword of Damocles known as COVID was not through with us yet; our annual ice cream social; and happy hours every Friday.

Many members spent the summer visiting the families they had not seen in over a year. One man surprised his granddaughter with his expertise on the dance floor, which he attributed to his attendance at Ballroom Dancing Club lessons, enhanced by expert tutelage from another Singles Club member. Others, who were not as fortunate, saw relatives’ milestones celebrated on Zoom.

The Singles Club welcomed many new and interesting members in the past year. One woman’s demanding career in the telecommunications industry had resulted in an aversion to advances in that technology. She only turns her cell phone on when she will be away from her landline for a significant period of time and proudly related “rubbing it in” after a relative’s cell phone died, and she was asked to retrieve a phone number from her paper address book. Another new member transitioned from being a truck driver to a real estate magnate, owning over 50 homes at one time. He has since eased off to a current total of five.

We elected new officers at our August meeting, including President Hazel Staloff, Treasurer Susan Williams, and Social Coordinator Sheelagh Simpson. During our September meeting, we discussed the many activities we are planning for the coming year, such as potlucks, dine-arounds, and holiday celebrations. Members have already committed to hosting Thanksgiving dinner and a Christmas party in their homes.

If you are never-married, widowed, or divorced in SaddleBrooke and would like to socialize with a convivial bunch of similarly situated people, please join us at our weekly happy hour, Fridays at 4 p.m. During odd months (January, March, May, July, September, and November) we meet for drinks and dinner in the Agave Lounge in SaddleBrooke One, and during the even months (February, April, June, August, October, and December) we meet in the Mountainview Clubhouse at SaddleBrooke TWO. Due to temporary closings and/or prior bookings, check first before attending. For more information, contact Hazel Staloff at [email protected]