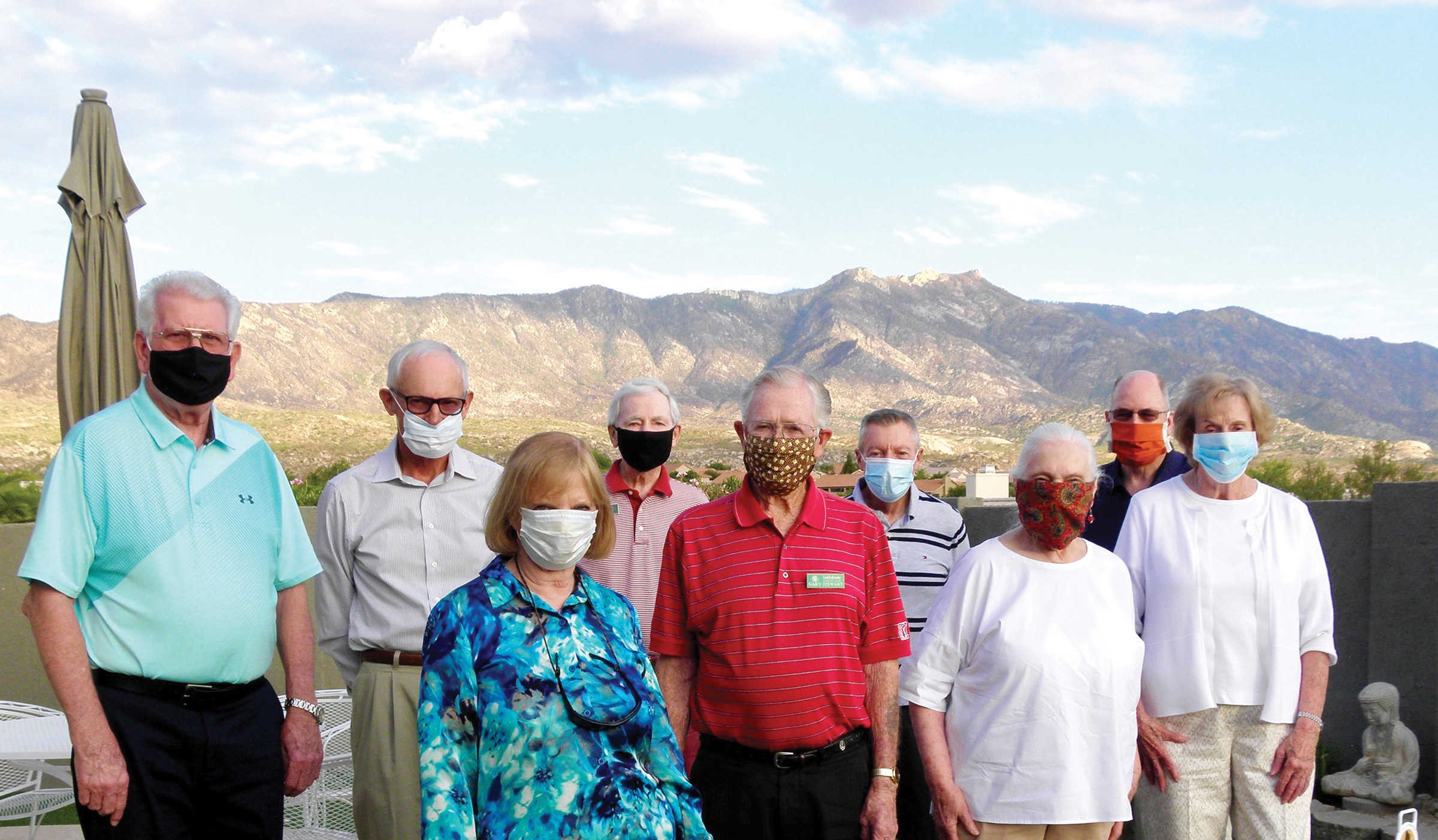 As the community began its path toward reopening, the SaddleBrooke Singles Club reactivated its busy social calendar. Friday afternoon happy hours at the Agave Lounge were the first events reinstated. The enthusiasm for contact with other humans was such that no vacancies at the table existed at the scheduled starting time and, given safety protocols, later arrivals were forbidden from squeezing themselves into the space. When the Preserve clubhouse opened subsequently, club members availed themselves of the opportunity to join one another on its patio.

Another highly anticipated event, the annual ice cream social, was held on July 25 and hosted by Arlene DesJardins. Although weight gain was one common consequence of the quarantine, i.e., the “lockdown 15,” no attendee expected the cessation of this unfortunate trajectory given the extensive offerings: four varieties of ice cream, frozen yogurt, fresh strawberries, chocolate and caramel sauce toppings, brownies, and homemade blueberry pie.

While indulging in the delightful desserts, conversations primarily revolved around our experiences during the lockdown. Given that all of the attendees were single, many referenced loneliness. One distinguished between loneliness and isolation. She regretted that the actions she had taken to ameliorate loneliness in the past, such as going to the library or to the movies, were no longer available. As she put it: “Quarantine is full time.” One woman contrasted her life in lockdown with the busy life she otherwise led, such as playing duplicate bridge three times a week. Feelings of loneliness were not limited to the lockdown for one widower who “doesn’t like being alone during a pandemic or at any other time.” Assuming his wife would outlive him, he never prepared himself to be alone in a “couples world.”

One attendee saw little change in his life since his primary activities, bike riding and motorcycle trips, continued unabated. Another man conducted his standard athletic regimen of tennis and golf. Two continued working. One “essential employee” was involved in transportation services for the disabled, and the other was a safety officer at SaddleBrooke.

Many people referred to their disappointment that events they had looked forward to were canceled. One man referenced his 50th college reunion, and another his granddaughter’s graduation as well as a family cruise. One woman made the best of the cancellation of multiple trips, one of which occurred after having arrived in New Zealand for her tour. While “hunkered down,” she worked on an elaborate needlepoint Christmas stocking for a recently born great-granddaughter. Having started in May, she was confident that it would be finished on time. Although there was no debate about the wisdom of the lockdown, one man stated ruefully: “They closed everything when there were a few cases. Now that there are so many cases, everything is open.”

SaddleBrooke Singles meet weekly for happy hour, Fridays at 4 p.m., at the Agave Lounge at SaddleBrooke One, and during the warmer months at the Preserve (due to prior bookings, check first before attending). For more information, contact David Dodd at [email protected]