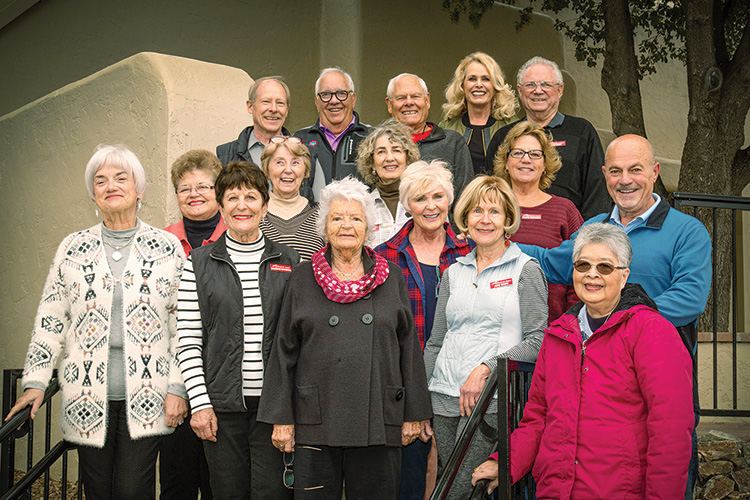 Time will tell, but the SaddleBrooke Singers plan to begin rehearsing an array of songs chosen to honor our veterans on Sept. 13. Our concert, “Lest We Forget” is scheduled to be performed on Friday, Nov. 6 and Sunday, Nov. 8, at the DesertView Performing Arts Center.

One of our SaddleBrooke Singers, Madeleine Fiorino, hopes to return to rehearsals with her fellow sopranos. Madeleine has a remarkable musical history. She was just four years old when she sang before her church congregation in French. By age seven, she was taking voice lessons from a former opera singer, and at age nine she found herself singing in six languages on her own Canadian radio program and was an opera singer for most of her life.

Madeleine won a contest amongst adults with her Faust aria and then as a 12-year-old went on to sing at New York’s Radio City Music Hall. A year later, she was awarded a Julliard School of Music scholarship. It was a tremendous opportunity for a young girl, but also a lonely time; she was away from her family. She resided with the faculty at the Manhattanville College of the Sacred Heart where she began teaching at age 19.

Madeleine appeared on Broadway in Oklahoma, and with Ethel Merman in Annie Get Your Gun. She also had a fantastic singing engagement at The Plaza Hotel in New York City. One evening, a group of men with the look of gangsters saw her performance and one of them handed her a printed card containing his phone number and the initials “A.C.” Madeleine never called Al Capone!

Instead, she found herself dating Lenny Bruce, who she says was “One of the nicest people I ever met.”

Ultimately, Madeleine married Emilio (Lee) Fiorino. They have five children, 11 grandchildren, and five great grandchildren. Her husband was an architect in Denver. There, Madeleine worked under the Arch Diocese of Colorado as assistant director of liturgical music. She also taught Gregorian chant, voice, and choral conducting and led her young men’s choir to first place, beating out three states in the “Lowell Thomas Boys Choir Competition.”

During their fifty years in Colorado, a long-time friend of Madeleine’s, Robert Goulet, often stayed with them when performing. On one occasion, he asked Madeleine to cook one of his favorite dishes and her oven quit. Madeleine asked to use her neighbor’s oven, telling her Bobby Goulet was coming to dinner. With a raised eyebrow, the skeptical neighbor volunteered to bring the hot dish over. She almost dropped it when at Madeleine’s request, Robert Goulet answered the door.

Wish Madeleine a happy May birthday should you see her. She’s likely to share with you her “thanks to God for all the blessings of her life and especially SaddleBrooke. This is just a little bit of heaven on earth.”

To learn more about the SaddleBrooke Singers, check out our website at saddlebrookesingers.org or contact Stephanie Mattie at 309-714-2474.