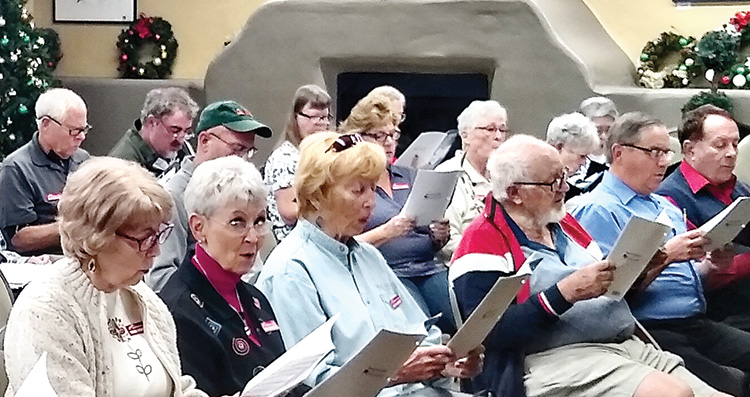 The SaddleBrooke Singers are pleased to be singing with their choirmates once again after a holiday hiatus. Their last concert on Dec. 8th was a wonderful choral tribute to the joys of the season. The Singers are busy rehearsing patriotic music for their upcoming spring show. The chorale’s spring concert will focus on America and the brave men and women who serve and have served to protect this great nation.

“Lest We Forget, America the Brave” is scheduled for Sunday, March 29th at 4 p.m. at the DesertView Performing Arts Center. Veterans attending the concert will receive special recognition during the performance. Please join and support them as they acknowledge those who sacrificed so much.

Those not in attendance at the Christmas concert missed the enjoyment of listening to the delightful children appearing on stage with the choir. The children joined in after choir director, Tanya Elias, suggested to the SaddleBrooke Singers Board the idea of using children’s essays as introductions to the various sections of their Christmas program, “Holiday Portraits.” She proposed they obtain entries for the contest in the writing categories of Portraits of Winter, Giving, North Pole, Nativity, Hope, and Tradition.

Elias’ idea was inspired by her nine-year-old cousin, Brigette Harrington of Hillsboro, Oregon. In 2018, Oregon’s governor arrived in Brigette’s classroom to let her know she had won the nation’s 2018 U.S. Capital Tree contest. Her winning essay earned her a November trip to Washington D.C., where she met many members of Congress, Cabinet officials, and even a rock star. At the tree-lighting ceremony Brigette read a shortened version of her less than three-minute poem before helping House Speaker, Paul D. Ryan light America’s Christmas tree.

Hopefully, the experience of writing essays and performing their creations on stage with the SaddleBrooke Singers will impact and shape the lives of the winning third and fifth grade students of Coronado K-8 School. The judges decided to encourage the student’s continued writing by giving a monetary reward to a runner-up for each category as well as two honorable mentions. The winning essay winners were: Ransom Banach, Aaron White, Ian Barron, Giovanni Paris, and Alaya Guerrero.

For information about singing with the SaddleBrooke Singers, please phone Jay Hansen at 520-271-8542. There’s no audition or experience as a professional singer required.