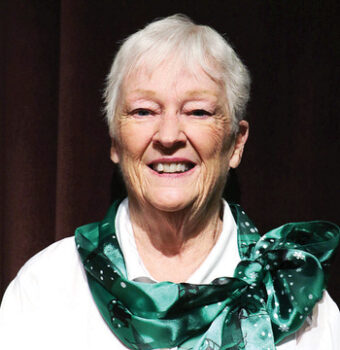 The SaddleBrooke Singers are rehearsing their show scheduled for April 1. Please mark the performance date on your calendar. We promise you will be entertained!

Participating in our spring performance is one of our veteran members, Patsy Partridge. Her first performance with us took place in the SaddleBrooke One dining room, then adorned with antler chandeliers and suitably called the “Big Horn Room.” She tells of a long history with music, finding it “difficult to find a time when I was not singing.” Patsy and her sister sang while doing dishes. “Our fun thing to do was to sing radio ads to each other! Our favorite was the Campbell soup, ‘Um Um good, Um Um good, that’s what Campbell soup is, Um Um good!’”

Born in a small town in central Indiana, Patsy’s musical interest was likely influenced by her mother, a choral and band instructor. Patsy began piano and baritone lessons as a child and sang in high school and church choirs. Later, she focused solely on singing when joining the DePauw University choir in Greencastle, Ind.

Fame Came Early: Early in Patsy’s high school career, she formed a trio with her sister and a friend. They patterned themselves after the McGuire Sisters, entering and winning the county fair talent contest. The prize was a live TV performance on the Farm Show, on WFBM-TV in Indianapolis. To their surprise, they were invited to become regulars on the new Indiana Hoedown TV show called Indiana Hoedown, a live Saturday night production. Known as The Jeffrey Sisters, they performed throughout high school and early college, touring summer fairs in areas as far away as the TV signal reached. It ended when Patsy’s sister graduated from college and married.

Meeting her future husband in college, Patsy married after their graduation. In 2021, they celebrated their 60th anniversary. Raising a boy and a girl, they now have four grandchildren and a baby great-granddaughter.

School Duties: After a 32-year residency in Keokuk, Iowa, the Partridges moved to SaddleBrooke, with Patsy leaving her job of “professional volunteer.” Participating in multiple organizations, civic and otherwise, she served on the Keokuk School Board for 15 years, serving two terms as president. Elected to the Iowa Association of School Boards, she served for 12 years, six years as an officer, including a stint as president. “While I appreciated the opportunity to help guide the educational direction of Iowa students, I, upon retirement, hope my days of attending meetings are concluded!”

Along with also singing with the Sonoran Singers, Patsy enjoys reading, bridge, and keeping in touch with friends and family near and far. Her Hoosier roots find her following college basketball.

“Retiring in SaddleBrooke has been a wonderful experience. There are so many activities for one to choose. For me, who has always loved music, SaddleBrooke Singers was an obvious choice.”

For more information about the Singers, phone Claudia at 520-306-2113. Our website address is www.saddlebrookesingers.org.