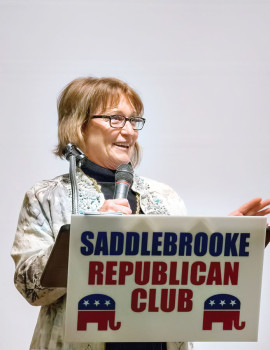 Sandra S. “Sandy” Froman is an attorney in Tucson, Arizona, whose practice includes business, contract and employment litigation as well as mediation and arbitration. She is recognized in the national publication Best Lawyers in America and was voted Best Lawyer of the Year for Employment Law – Management in Tucson, Arizona. Froman received her undergraduate degree in economics with honors from Stanford University and her juris doctor degree from Harvard Law School.

As a former president and a current board member of the National Rifle Association, she is only the second woman to have been elected president since the NRA was founded 144 years ago. She speaks and writes on our Second Amendment, Constitutional law, women in leadership, the Supreme Court and federal judiciary and she purposefully supports the need to restore civics education in all of our schools.

Sandy explained to the assembled and enthusiastic Republican gathering how they need be ever watchful of every law promoted by the anti-gun lobby as they look toward the total ban of all firearms and how the potential for banning certain rifle ammunition by the ATF is yet another cornerstone of the current administration’s efforts which would affect hunters and marksmanship contests as well as those of us who just enjoy teaching our children target shooting and rifle proficiency. She cautions we should be ever watchful of all our rights to keep and bear arms. She also informed our members that she carries!

Froman has been active in state and national politics for decades. She has been instrumental in the passage of Arizona’s significant pro-gun laws, including Right to Carry and Firearms Preemption. Sandy is a recipient of the Sybil Ludington Freedom Award for legislative and legal contributions that have impacted the preservation of the shooting sports. An NRA – certified instructor, Froman promotes firearms education, safety and marksmanship training, especially for women and youth and she played a key role in developing NRA’s Refuse to be a Victim Program. Sandy Froman is the current Chairman of the Board of the Joe Foss Institute (www.joefoss.com), an educational nonprofit foundation established by WWII flying ace, Congressional Medal of Honor recipient and former NRA President, General Joe Foss and his wife Didi, to inspire the youth of America to patriotic public service.

Email [email protected] for information to join our club.