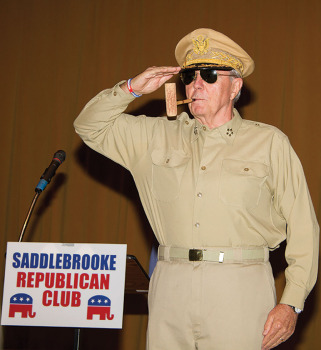 General Douglas MacArthur (portrayed by Board Director Wayne Larroque) was the mystery guest at the November 12 Republican Club Forum.

The SaddleBrooke Republican Club’s November 12 Forum was the time to recognize and honor our veterans and the organizations that support them. We were led in our flag salute by Ed Davis, Commander of American Legion Oro Valley Unit 132. All attending veterans were recognized by service and applauded by the SBRC membership. Our much speculated mystery guest was General Douglas MacArthur, convincingly portrayed by Board Director Wayne Larroque. The general repeated a speech he’d delivered to West Point Cadets many years ago. Ms. Sheron Jones, President, American Gold Star Mothers, Tucson Chapter spoke on the good works this wonderful organization does. Her son, Staff Sergeant Darrel D. Kasson, made the ultimate sacrifice in Iraq, March 7, 2007. Our outgoing SBRC Vice President Roger Bogard was given a plaque recognizing his many years of contributions to our club, to include the positions of President and Membership Director. Wrapping up the Forum was local radio show host of Smart and Edgy Political Talk, Emil Franzi, who provided an interesting and humorous insider’s analysis of the recent general election.

Our SBRC Christmas Party is Tuesday, December 16, from 4:00-6:00 p.m. It will be held at the Agave Lounge, SaddleBrooke One Clubhouse. The event includes a cocktail party, hors D’oeuvres, cheeses, cookies and non-alcoholic drinks. There will be a full no-host bar. Tickets are $10 per person and are now on sale. Call 825-4030 to make a reservation. Space is limited. Visit us at www.sbrc1.org.