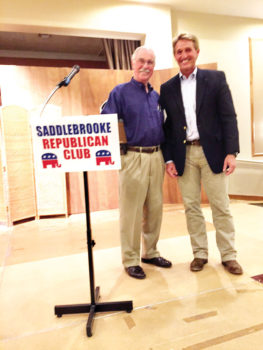 Senator Jeff Flake was the featured speaker at a special meeting of the SaddleBrooke Republican Club on March 31. Senator Flake spoke briefly about his desire to fight uncontrolled spending, his vote against the Omnibus Spending Bill and his successful efforts to defeat earmarks. The Senator said several concerns keep him up at night – the threat of terrorism and our ever expanding budget. He accompanied President Obama on his recent trip to Cuba and favors the ability of Americans to travel to Cuba in the belief that American citizens are the best ambassadors of our free republic in the communist socialistic country of Cuba. Senator Flake concluded by stating that he believes that the Senate has a right to block the vote on the President’s recent nomination to the Supreme Court until after the election. He emphasized his desire for the most conservative judge possible to fill the vacant position on the Supreme Court.

Following his speech, Senator Flake answered questions which had been submitted to Neil Macdonald, the president of the SaddleBrooke Republican Club by members of the Republican Club. Neil posed questions to the Senator relating to the current policy on Cuba, the recent nomination to the Supreme Court by President Obama, issues concerning the Border Patrol and immigration, the threat that North Korea poses, the policy concerning health care for our veterans and Obama Care. Senator Flake emphasized that during his time in the Senate he has worked to promote a conservative philosophy of less government, more freedom and individual responsibility.

Senator Jeff Flake is a fifth generation Arizonan. Prior to his election to the U.S. Senate, Jeff served in the U.S. House of Representatives from 2001 to 2013. As a member of the U.S. Senate, Flake sits on the Judiciary Committee, the Energy and Natural Resources Committee and the Foreign Relations Committee.

Senator Flake closed by saying that he would be honored to return to speak before the SaddleBrooke Republican Club in the near future.