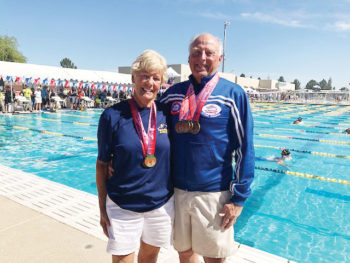 Both Jack and Jill grew up around water and each learned to swim at an early age.

Jill’s mother, Doris Buckley, was on a winning relay team in the 1935-36 years and held a national record for two years swimming for the Washington Athletic Club in Seattle. She went to the 1936 Olympic trials in New York City but just missed out making the four women team by .02 of a second. Later the fourth girl was dropped from the team on the ship to Germany. Jill’s father was raised on Bainbridge Island, near Seattle and he loved the water. He swam six miles from Bainbridge Island to Seattle when he was 17 years old. Later he became a life guard and met Jill’s mother at Green Lake, where Jill learned to swim. Years later her family bought property north of Seattle in Edmonds and he eventually built a 20’X40’ swimming pool on the bank overlooking Puget Sound.

Jack’s background was growing up on Lake Michigan in South Haven where in the 1930s he learned to swim in the lake from the High School football coach. His younger summers were spent at the beach all day with his friends, racing up the pier, diving in for falling rocks and just having fun. Later in 1947–1948 he became a lifeguard for the Parks and Recreation Department. After college and doing his stint in the Navy on an aircraft carrier, the Admiral would give them swim privileges of swimming in the Atlantic Ocean or Mediterranean Sea. Jack thought he would never reach the water after diving off from the bridge!

And then came along Jack who met Jill, on a hill, of course! They met up skiing at Stevens Pass outside Seattle. He made quite the impression by asking her to go swimming with him at the Elks Club the next week. There weren’t many places to swim indoors in Seattle at the time. Even on the first date they were challenging each other to races. They have had many races against each other over the years, and still do in the competitions today. Neither had completion experience before Coach Doug (Springer) moved to SaddleBrooke and organized a swim team. That was 15 years ago now and they have loved every minute of it. Jack is winning the faster events and Jill the longer ones. Over the years, they are both All American and National champions, holding national relay records. The excellent coaching, fun and comradery of the SaddleBrooke Swim Team have helped them enjoy good health.