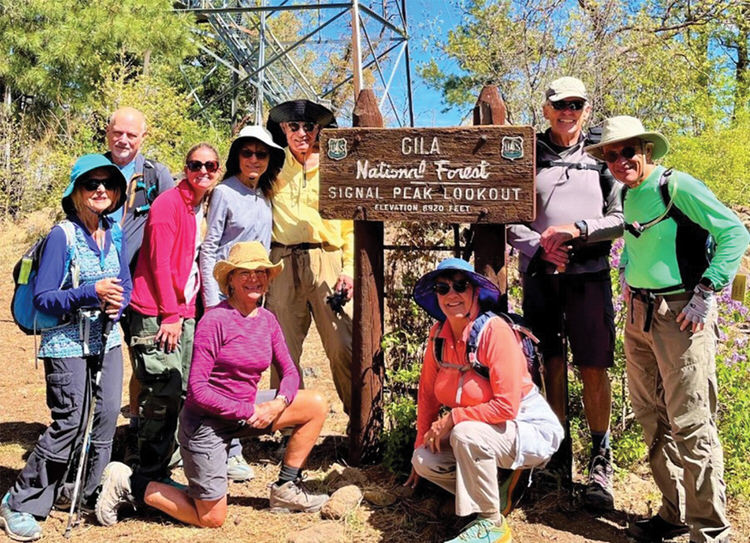 The SaddleBrooke Hiking Club’s Trip Committee functions to identify and plan interesting hiking trips outside our area. Generally, they plan two trips each year. This year the trip committee selected Silver City, N.M., for a May 11 through 13 trip. The city borders the Gila National Forest, which has an extensive system of maintained trails.

Eighty-nine of our fellow residents signed up to attend. The historic Murray Hotel in Downtown Silver City served as a central meeting and lodging location. From there, small groups set out to hike a variety of areas such as the Gila Cliff Dwellings National Monument, a steel Catwalk walkway suspended above a river in a beautiful canyon, a hike up Signal Peak to a fire watch tower, hikes along streams well into the Gila Wilderness, including one with 25-plus stream crossings, and many others. In addition to these hikes, participants visited Fort Bowie National Historic site, a ranger-led tour of Fort Bayard, a city mural walk led by a volunteer with the Silver City Art Association, and other Silver City attractions.

A trip like this only happens with the help of volunteers. In addition to the Trip Committee members, 13 of our own SaddleBrooke Hiking Club guides led hikes, and many others, including volunteer members Terry Caldwell, Gary Somers, and Bertie Litchfield, stepped in when needed. The selection of hikes was researched and presented by Susan and Jeff Love.

The weather was great, and smoke from wildfires was not a problem, which allowed most events to proceed as planned. However, one day, a jackknifed semi blocked the road, preventing hikers from reaching the Gila Cliff Dwellings. Wildlife was prevalent on this trip. Reports of a black bear and two cubs, a scary number of rattlesnakes, and a Mexican gray wolf were among those reported. Hiking can be a vigorous activity for us seniors. Thankfully, we had no reported injuries, and we were able to appreciate what this area in Southwest New Mexico has to offer.