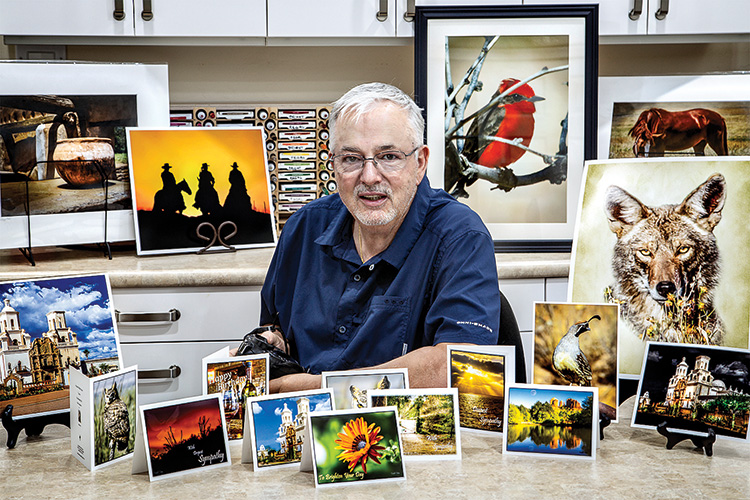 This month the SaddleBrooke gift shop is featuring artist Russ Stokes, a published photographer specializing in the Southwest.

Russ was born in Seattle and attended primary school in Woodinville, WA. His family moved to Anaheim, CA in the early ’50s, then later to San Diego where he attended high school. Russ continued his education at Montana State University where he majored in Criminology.

In 1964, Russ joined the U.S. Navy and served for four years at the U.S. Naval Amphibious Base in Coronado, CA.

Russ met his wife, Angela, while both were doing voluntary work. His career was in Crisis and Risk Management, and he and Angela lived in Carlsbad, CA before retiring to SaddleBrooke in 2004.

As so many of us did, Russ and Angela fell in love with SaddleBrooke as soon as they first saw the backdrop of the Catalina Mountains. They bought their home that same day. SaddleBrooke was everything they were looking for in a retirement community from the gorgeous views to the active lifestyle.

Russ began taking pictures when he was a teenager, and his love of photography has grown ever since. He considers the great outdoors to be his studio while photographing wildlife and landscapes. Russ states, “I find peace behind the lens.”

Russ also does portraits, group photography, photo greeting cards, and prints, as well as photo restoration and custom photo work. Many of his prints and photo greeting cards are available at the SaddleBrooke gift shop. Russ uses digital camera equipment and shoots images in raw (uncompressed, digital negative) format. Russ has a home office and studio where he processes his images using computer software and prints the majority of his own images, enlargements, and greeting cards.

Russ says that he finds “great satisfaction in completing custom and restorative photography work for clients.”

In addition to photography, travel is another of his favorite things especially exploring Europe and the South Pacific islands.

Russ joined the gift shop in the spring of 2016 after being introduced to it by a current member.  There, he showcases his photograph prints and greeting cards. Russ has contributed greatly to the shop with his writing of numerous articles about its member artisans. He particularly enjoys greeting and talking with the resident shoppers and guests while assisting them in finding their ideal item(s) or gifts.

Russ encourages others to enjoy every moment nature shares and live life to the fullest every day.