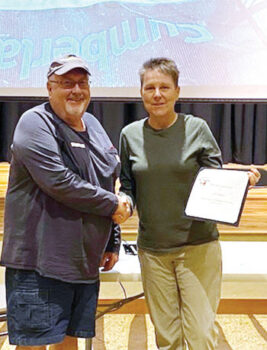 October’s meeting of the SaddleBrooke Fly Fishers (SBFF) was both interesting and informative, with local angling expert Jeff Collins as the guest speaker. Jeff is a former president of Old Pueblo Trout Unlimited and was the Arizona Trout Unlimited chairperson for four years. In addition to continuing to volunteer with Project Healing Waters, to help wounded veterans, Jeff hosts a Facebook page called Arizona Flyfishing in Float Tubes and Inflatable Pontoons, which has almost 570 members.

Jeff is a big fan of fly fishing from float tubes and says they are an affordable way to get out on the water. He discussed the different types of float tubes and pontoons and how float tubes can be outfitted with fish finders, motors, anchors, and other gear. He also talked about great places to fish in Arizona and flies to use for both trout and other species. It was obvious Jeff enjoys the ease of float tubing and the prime perch it allows him to get where the fish are and observe various types of wildlife while he’s at it. His enthusiasm for the sport is contagious, and he graciously offered to host a float tube fishing outing for SBFF members at Silverbell Lake. More information will be sent out to members via our club newsletter.

Attendance was good, and we even picked up two new members, for a total of 69. Club secretary and nominating committee chair, Larry Linderman, made a pitch for members to serve on the board or on the nominating committee. The goal is to have a slate together by the end of the year so membership can elect a new board at the January meeting.

Our November meeting will probably be canceled, as we’ll be having a party instead. Those interested in joining us can learn more about the club by emailing us at [email protected]