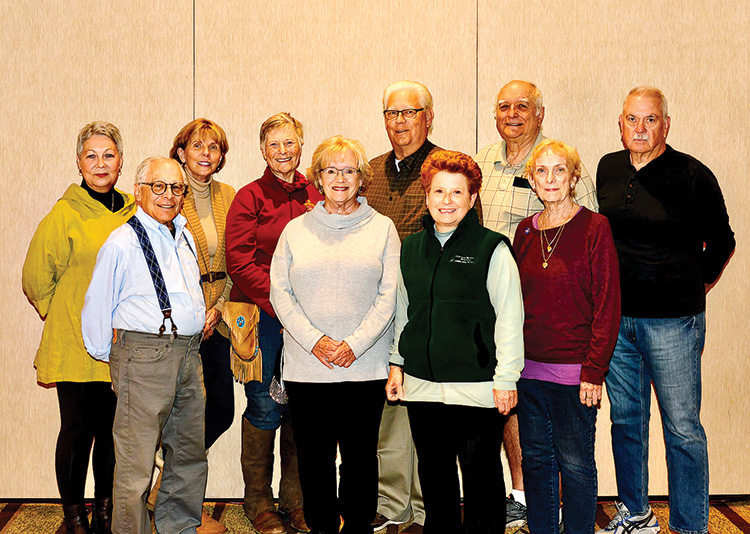 Susan Williams was unanimously elected president of the SaddleBrooke Dog Park at its annual meeting on Feb. 6. She replaces Kathleen Dunbar, who served as president for three years and was honored at the meeting for her numerous contributions to the park.

Appointed members of the board are Jim Vavra and Ken Wentz, who will continue as maintenance directors and Bonnie Buntain, DVM, continuing as director of the safety committee. Newly appointed board members are Ron Luning, membership director; and Bud Alexander, web manager.

Dunbar was recognized for her leadership and congratulated on her well-earned “retirement.” Under her leadership, many improvements were made to the park, including a ramp to the back entrance, making entry safer and more parking available; Riley’s Place for training classes and the safety of our puppies and mature dogs; the re-sodding of the large and small dog areas; as well as improvements to the “Wild Side.”

Williams was born in Houston, TX, and lived there until moving to SaddleBrooke (with Sweetie, her Boston terrier) in 2017. She graduated from the University of Houston and worked there until retiring in 2016. While in Houston, she volunteered at Armand Bayou Nature Center and, through that organization, developed a love of bird watching. She loves SaddleBrooke, Tucson, and Arizona and feels very fortunate to be able to enjoy retirement in such a marvelous place.

She also serves on the Board of WOOO (Women on Our Own) and is a volunteer with SaddleBrooke Community Outreach. Williams said she discovered “our wonderful dog park soon after moving here and can’t imagine not having this wonderful resource.” She hopes to see the park continue to be the happy place that it is for our dogs and for other SaddleBrooke residents and looks forward to working with the amazing board, volunteers, and members.

McAfee moved to SaddleBrooke with her husband Bruce and two chihuahuas, Chuchi and Toby, in May 2018, after 14 years in Las Vegas and 30 years in California. They adopted a third chihuahua, Ruby, from a local rescue group. She is retired from commercial real estate with a background in shopping center and retail management. She served on the boards of directors for Pug Rescue San Diego, Pug Rescue Northern California, and, most recently, the Tortoise Group Las Vegas.

Goldberg is a former journalist and science writer, budget officer, operations director and – after his first retirement – conducted one and two-day seminars to introduce middle and top management to OSHA throughout the U.S., Canada, Ireland, and England. He first joined the park in 2008 and helped with maintenance. He serves as a dog park ambassador. He joined the SaddleBrooke Dog Park board in 2017.

Hawkins grew up in Connecticut and worked in healthcare administration in the northeast and Washington state, before retiring to SaddleBrooke in 2017. After attending the dog park annual meeting in 2018, she volunteered to work on membership and joined the board later that year, serving as secretary for two years. She has two dogs — Raisin, a chocolate lab; and Gracie, a black lab mix rescue.