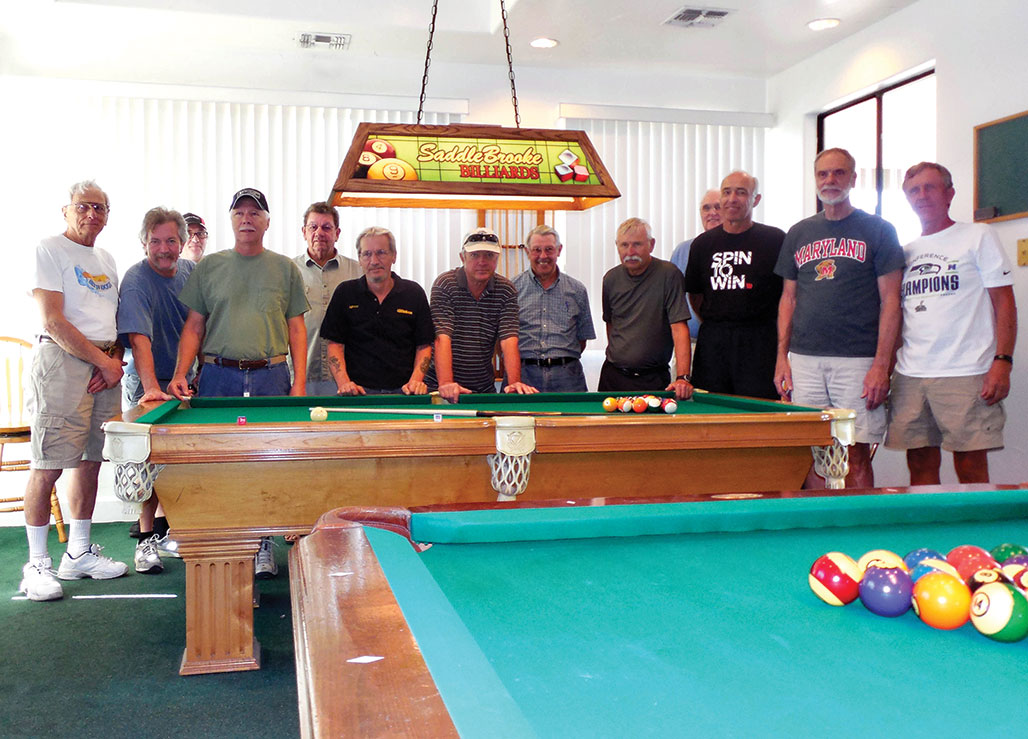 Participants in the 8-Ball Tournament

A big thank you goes out to all the participants of the first SaddleBrooke 8-Ball Open Tournament held on Saturday, November 1. Dominic and I really enjoyed the company, the eats and above all the competition. With the help of SaddleBrooke Ranch, the SaddleBrooke Senior Softball Association and all of you this event was a complete success and there will be more to come. In addition Dominic and I would like to thank SaddleBrooke HOA 1 for the use of their facility and SaddleBrooke HOA 2, the Bistro, for having our delicious pizzas ready to fit our schedule.

The day started at noon with pizza and salad provided by Tournament Directors Dominic Borland and Joe Giammarino and a variety of other goodies provided by the players. A lot of love was shown for Bob Ski Bujnovsky’s cheesecake—ummm good! A players’ meeting was held at 12:45 p.m. to explain the format and rules. Play commenced on two tables at 1:00 p.m.

Richard had to be talked into playing as he thought he couldn’t compete, but I coaxed him into playing and he did quite well with a fourth place finish. Dominic lost his first match and had to battle all the way through the loser’s bracket to get to the match before the finals before losing to Jim and taking third place. Jim played well all day as usual and met Joe in the finals. The finals were extended to a two out of three match and Jim would have to beat Joe twice as Joe was undefeated and Jim had one loss. Jim showed his strategic prowess and shot making skills in the first two out of three to defeat Joe two to one to force a final two out of three matchup for the championship. Jim won the first game of the final set but Joe struggled back to win game two. The final and 30th game of the tourney went back and forth with Joe outlasting Jim to win the game and the tournament. Congrats to Richard, Dominic, Jim and Joe on their shooting skills.

We are in the early stages of scheduling another tournament; this one at SaddleBrooke Ranch early next year; watch for details. If you would like to be included in our email list please send your email to Joe Giammarino at [email protected] or Dominic Borland at [email protected] For more information about SaddleBrooke Billiards go to this website http://www.billiardsclub.blogspot.com/.