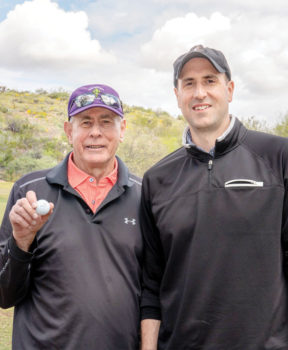 Ron and Mark Tie with the hole-in-one ball

As the foursome approached the fourth green at MountainView, they noticed that only three golf balls could be accounted for. Ron knew he hit a good shot but Paul Zapf, who was also in the foursome, did as well. Ron suggested to Paul that he should look in the hole for his ball. Paul found the ball in the hole, but since they were playing similar golf balls it was not immediately apparent whose ball it was. After a closer inspection, Paul told Ron that it was Ron’s ball. Another hole-in-one for a great SaddleBrooke golfer (number five to be exact). MountainView has been good to Ron. Two of his previous holes-in-one were also at MountainView on holes 8 and 17. All Ron needs now is to conquer the 13th for a sweep of MV.

The best part of the achievement was sharing it with his son Mark. The hole-in-one took place during the Member-Guest Tournament and his son was his guest for the event. It seems that Ron likes special occasions to record special achievements. His first two holes-in-one were in Florida. one on New Year’s Day and one on his sister’s birthday. What a great experience for the Tie family and for the members of MPMGA since we get to enjoy another keg of beer. Thanks Ron.