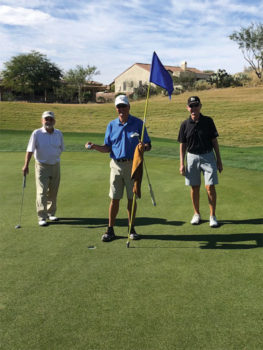 I am sure that most of you have forgotten how many holes-in-one members of the Men’s Club recorded in 2016. The number was 20 and at that time it set a record. All of a sudden, thanks to Rick Cole, that record has a realistic chance of being surpassed. On Tuesday, November 20, Rick was playing at the Preserve with Denny Life, Jack Jackson and Bob Eder and he brought this year’s total to 16 with an ace on number eleven. The distance was about 165 yards and his club of choice was a five iron. The ball landed on the hill on the right side of the green and in a matter of seconds it rolled softly into the cup. Yes, everyone saw it happen! Congratulations one more time for your second hole-in-one.