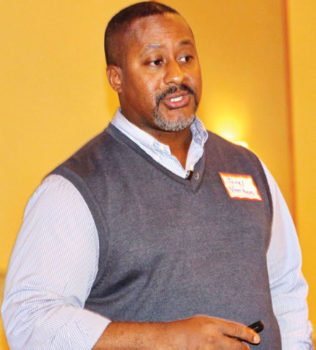 Community Church at SaddleBrooke (CCSB) was honored and privileged to have John Voorhess speak at their Men’s Breakfast in November. He spoke about finding God in his life and building a legacy.

He spoke of the times in his life that were the hardest and that his dad was always there to offer support when he needed it the most. He found out the most important thing in his life was building a legacy in his own family.

He also talked about how he and his wife prayed six months for three Americans held hostage in Columbia, and nothing seemed to happen. Then, they were rescued in a non-violent way and that prayer had been the answer to getting them home.

John ended his talk by telling us about his family and showing us pictures of all of them together. He especially pointed out the last picture of his father, who had been battling cancer for thirteen years, before he passed away.

Community Church at SaddleBrooke is a Christ-centered church with the mission to glorify God by becoming a community of grace where people will receive, live and share the love of Jesus Christ. Join us at DesertView Performing Arts Center every Sunday morning at 8:30 a.m. in SaddleBrooke. All are welcome.