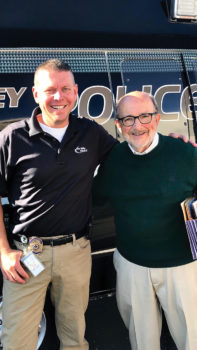 Gary Zellinger announced the next breakfast would be on Saturday, April 4, when Resurrection members Walt and Tiggy Shields would feature “Vietnam Today: The Land, The Culture, The People.”

Program chair for the month, Al Toensing, introduced Lt. John Teachout, who gave an entertaining presentation on the use of UAVs (unmanned aerial vehicles) and the ways they are used in law enforcement. Lt. Teachout is a second generation Tucsonian and a graduate of Salpointe Catholic High School. A decorated law enforcement officer, he was promoted to lieutenant in 2007. John holds a bachelor’s degree in criminal justice from Park University, is a graduate of Northwestern University’s policy staff command college class 33, and serves as a member of the Arizona chapter of the FBI National Academy Associates.

At our breakfast meeting, we learned that many of us say “drones”, however, law enforcement prefers the term “UAV” or unmanned aerial vehicles. Early use of this technology locally was during the 2017 Oro Valley Music Festival, with approximately 7,000 attendees. Oro Valley Police quickly realized that using this technology helped with crowd and traffic control, while serving as an extra set of eyes with a low cost of operation.

Lt. Teachout emphasized that privacy is very important and UAVs are not used for toys or surveillance or as an intrusion into privacy or replacement for manned aircraft. They are not armed with weapons or used as drones.

The most interesting part of the presentation was going outside and flying the machine. It operated effortlessly as it departed, hovered about 100 feet above the church, and landed on command. While the vehicle was flying, the attendees could view it on a large television screen. A question and answer time was provided at the end of the program.

The Resurrection Church Men’s Breakfasts take place on the first Saturday of the month from October through May. Meetings are held at the Outreach Center at the main church campus in Oro Valley. Breakfast starts at 7:30 a.m. Church opens at 7 a.m.

Resurrection Lutheran Church at SaddleBrooke holds its all denominational Sunday worship services at 9 a.m. and 10:30 a.m. in the Vermilion Room at the SaddleBrooke One Clubhouse. All are welcome.