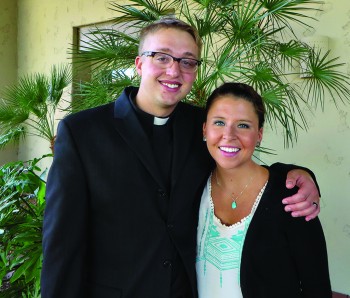 On October 4, the first Sunday that Resurrection Church at SaddleBrooke held two services, Intern Pastor Stephen Hilding was in the pulpit. Although he has become somewhat of a fixture at the main campus in Oro Valley and has conducted a number of Sunday and Wednesday evening services there, this was the first time for him to do so here in SaddleBrooke. Attending with his wife Annie, who becomes an instant favorite wherever she goes, his message, The Elephant in the Room, was thoughtfully prepared and well received.

Prior to this Stephen and Annie were not strangers to our community. Along with Senior Pastor Al Jensen and his wife Char, they had been special guests at one of the September patio parties. Also, those from our community who attend the Wednesday night service at the main campus have gotten to know both of them. They are usually in attendance and go out of their way to greet and interact with as many people as possible.

Now in his third year at Luther Seminary in St. Paul, Minnesota, Stephen grew up in Hudson, Wisconsin, a community near the western border of the state. Before entering seminary he graduated from Gustavus Adolphus College in St. Peter, Minnesota, with a major in music. Annie grew up in Woodbury, Minnesota, which is right across the St. Croix River from Hudson and is a part of the suburban Twin Cities area. As Stephen was crossing that river to attend college and eventually to call on Annie, she crossed the same river in the opposite direction to attend college, graduating with a degree in marketing from the University of Wisconsin at River Falls.

Stephen and Annie met in the summer of 2011 when they were in training as camp counselors at the Green Lake Lutheran Bible Camp in Spicer, Minnesota. They married a year ago and eight months later made their way to Oro Valley for Stephen to begin his internship. They will be here until mid-July of 2016. At that time they will return to St. Paul so that Stephen can complete his final year of seminary.

What happens after that is impossible to predict. They are an adventurous, intelligent and extremely personable young couple who have a dream of serving in the ministry together. They will go where they are “called” to go. There is little doubt that what they do will be done successfully.

Resurrection Church at SaddleBrooke holds its traditional all-denominational Sunday worship services at 8:30 and 10:00 a.m. in the Vermilion Room at the HOA 1 Clubhouse. All are welcome.