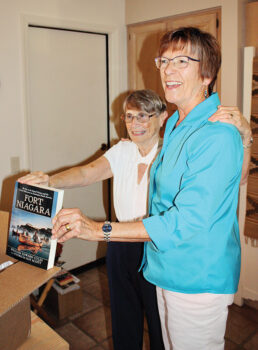 All last winter, I worked with Kay Sullivan, a SaddleBrooke artist, and William Utley, a military historian and friend, to produce Fort Niagara: The Key to the Inland Oceans and the French Movement to Dominate North America. This book should interest SaddleBrooke residents, especially those who moved here from the Great Lakes areas of New York, Pennsylvania, Ohio, Michigan, or Eastern Canada—all of which were once claimed as part of France. The book is about that fascinating span of North American history when New France was established in present-day Canada, and then the French explored and expanded from there in their attempted to dominate North America in the 17th and 18th centuries. The illustrations include Kay’s splendid maps and photographs. Robert Griffing’s Departure At Daybreak on the cover depicts a typical 18th-century morning scene of Fort Niagara, located twelve miles downriver from the world-famous Niagara Falls—an area that was once the territory of the Iroquois but claimed by France.

This book stresses the early history of New France, the fur trade, and that it was only in the early 1700s that the French were able to reach an agreement with the Iroquois to gain access to a strategic portage around Niagara Falls. Then, between 1726 and 1759, Fort Niagara evolved from a wilderness fur-trading post into a strong French military site at the time when rivalries were impeding the French desire to dominate North America. Mosaics of peaceful and violent cultural interactions happening elsewhere are woven into the text, and the authors stress the importance of alliances formed through respect, cooperation, gift exchanges, and ceremonies in these years of contests for land, trade, and power. The final chapters describe the importance of Fort Niagara leading up to and through the dramatic French and Indian War—a war which ended the French attempt to dominate North America and set the stage for the Iroquois to lose the Niagara River. This history of the French and Iroquois on the Niagara River is a universal story regarding the difficulties people have in reaching across cultural divides to share cherished places, resources, power, and prestige. It has a timely aspect in that the book shows the importance of gaining and keeping allies.

Fort Niagara: The Key to the Inland Oceans and the French Movement to Dominate North America was published in late May 2019 in soft cover, hardback, and e-book editions. It can be ordered through any bookstore or online book dealer. The authors can be contacted at [email protected] See Amazon.com for more information about the authors and a short introduction to the book.