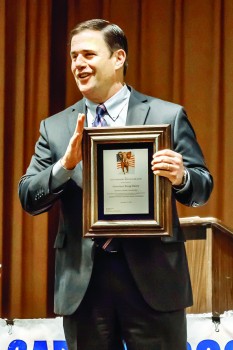 Governor Ducey with his Membership Plaque

On Tuesday, September 15 the SaddleBrooke Republican Club welcomed Arizona Governor Doug Ducey for his first visit to SaddleBrooke as our governor. The club also hosted over 200 members, guests and other local officials to the luncheon event held in the HOA 2 ballroom. Starting the proceedings, State Senator Steve Smith, from our own Legislative District 11, was awarded the Legislator of the Year Award from the 15,000 strong Arizona Police Association. This was well deserved recognition as our Senator works full time in support of all of Arizona’s law enforcement men and women. All of our club and LD11 members are always delighted when Steve can join us at our events. Among our other guests we enjoyed seeing Arizona House Speaker Dave Gowan, our own Representative Vince Leach from SaddleBrooke, County Supervisor Anthony Smith as well as Virginia Ross, our Pinal County Recorder and our Pinal County Assessor Doug Wolf.

The Governor was welcomed by Wayne Larroque, our Club Director of Events, and was presented to our members and guests. Governor Ducey gave a well-received encapsulation of his first eight months in office, starting with the debt he had inherited and how that debt was now reduced and retired through the changes he and his administration had introduced. The Governor also reminded us of the changes he had spoken of while running for the office and gave our audience a solid update of his successes to date. These included changes and betterment in child welfare, replacement of agency heads who were not performing well and how he had forcefully advocated and successfully brought new business to Arizona. He has reduced staffing throughout Arizona government, a promise which he had made during his race for the governorship. Ducey also spoke to his plan to use the state trust land fund to pay for increases in education funding over ten years beginning in 2017. Listening to our newest Governor, one got the sense he was exceptionally capable and well prepared to take Arizona forward and fully comfortable with his leadership role.

The Governor, as was promised, then took questions from the audience. These ranged from questions on Common Core, on border issues and more on the funding of education. As we knew, the governor had many other events to attend. Just before he left, SaddleBrooke Republican Club President Mike Stites presented Governor Ducey with a plaque which proclaimed the Governor as an Honorary Life Member of the SaddleBrooke Republican Club. The Governor and his party then left for events in Tucson. Our Pastor then provided us with an invocation and an excellent light lunch was then served to our members and guests. After the meal, the meeting was closed out with everyone singing God Bless America led by 11-year-old Andrew Robles.

A large, large thank you to Marian DiPietro for her planning and excellence in the coordination of this SaddleBrooke event. We are indeed fortunate to have her on our team. Also a solid thank you to all of our pinch hitters who did Welcome Desk duties and table placements.