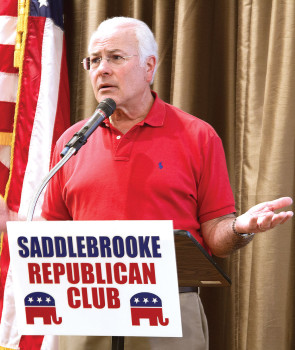 On February 4 we had what could only be described as a large crowd at the MountainView Ballroom. The SaddleBrooke Republican Club quite literally ran out of room for all of the guests who wanted to come hear our featured speaker, Colonel Jon Gold. None were disappointed and there were standing ovations of applause during the Colonel’s discussions and explanation of where ISIS came from, their apparent purpose and how the world will still have to deal with their atrocities throughout the Middle East.

Few were surprised when Jon told of the speed at which ISIS came to power, which was brought about mainly through the lack of proven military capability within the Arab countries of the region. Clearly the situation in Iraq left a void of combat preparedness which, together with the Syrian situation, made the opportunities for and by ISIS much easier in their campaigns across the Levant.

We were also told by Colonel Gold that the United States is still the world’s one superpower. We are the only ones capable of defeating an enemy anywhere in the world. Jon showed slides of huge areas of Tokyo and Berlin which were deliberately flattened in WWII. He told us that is what war does when it’s fought to win and until an enemy agrees to surrender unconditionally. Jon told us we are a strong enough nation to tactically defeat this new terrorism, the way we must to win, once we allow our military to fight it.