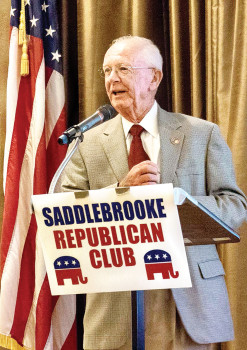 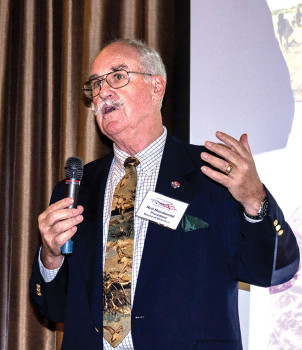 The SaddleBrooke Republican Club opened its first meeting of 2016 on January 13 at the MountainView Ballroom. Our first meeting of this election year 2016 was well attended with almost 200 members and candidates in attendance. Needless to say there was a good amount of club business to attend as well as some Bylaws changes needing to be affected. We were able to introduce to our membership five newly positioned Board members. Richard Brinkley is the new club vice president, Patricia Tarner our Board secretary, Linda Schuttler now takes on the duties of membership chair, while JoAnn Livingston is now the club’s new Director of Special Events. Taking over from Wayne Larroque, Carol Dart now has the responsibilities of the Director of Programs. The Nominating Committee continues to be directed by Anita Woodbury with two newly elected committee members having stepped up for this important role. Both Bill George (he also is our highly esteemed club photographer) and Kenneth Schuttler now round out our Nominating Committee.

Club business was attended to and voted on by our members at this meeting. We accepted and voted on several minor corrections to our club Bylaws. Each Bylaw correction received overwhelming approval by our attending members, resulting in our membership’s acceptance of all the club Bylaw changes presented to them by President Neil Macdonald.

As is normal with our club meetings in an election year, all candidates present were afforded the opportunity to come before our membership to speak briefly and to explain their candidacy.

Wayne and Carol then introduced our speakers who came up from Sierra Vista to give our membership an overview of the U.S. Military activities within the Army community of Fort Huachuca here in southern Arizona. Tom Finnegan, Colonel (retired) spoke first and explained how the natural geology of the base locations within southern Arizona of Fort Huachuca and climate made for ideal training conditions. The area topography replicates well those conditions found in current theaters of operations world-wide. Fort Huachuca supports joint and interagency teams with critical aviation, intelligence, signal and cyber training. The fort offers more than 65,000 acres dedicated to training with elevations from 4,000 to 9,500 feet above sea level. The facilities offer more than 350 flying days each year.

David Godlewski, currently serving as the president of the Board for the Southern Arizona Defense Alliance (SADA) then spoke to the critical capabilities of Mission Strong, a campaign of a broadly based group of local and regional businesses and community leaders who have come together to help support and preserve our military presence in southern Arizona.