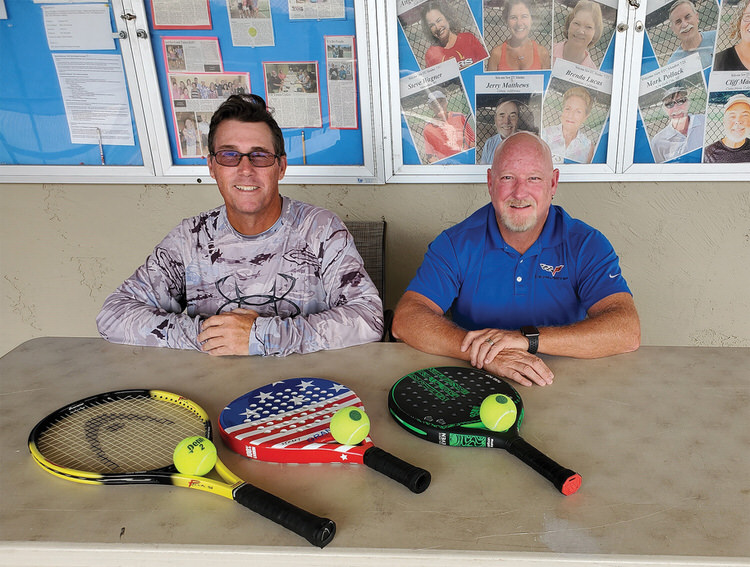 Chris Madsen and Mike Dunbar agreed to answer some technical questions about the differences between tennis and POP Tennis. To my surprise, both men have one thing in common: They both met their wives on Match.com.

Chris Madsen is ranked as a professional tennis player with the United States Tennis Association and has competed in many national competitions. He earned the rating as professional eight years ago.

Mike Dunbar has only played POP Tennis for one year but has extensive experience in tennis for over 40 years. Mike is serving as chairman of the SaddleBrooke Tennis Club POP Tennis Committee.

Mike enjoys POP Tennis, as it is easier on the body. Mike commented, “The court is smaller, and I can play physically longer.” He also enjoys the social aspects of the sport. Mike is working towards generating more interest in POP Tennis from the community.

Chris Madsen and Mike Dunbar both help SaddleBrooke residents learn and experience POP Tennis by having drop-in clinics that are open to all SaddleBrooke residents. Some POP racquets and POP Tennis balls are provided. These drop-in clinics are free. They are open to those who know nothing about the sport, as well as those who are just learning and want more instruction.

Drop-in POP Tennis clinics go over the basics, such as serving underhand. The smaller boundaries are explained because SaddleBrooke POP Tennis courts are actually outlined with different-colored stripes over the existing tennis courts. The rules for when a ball is out are different, and it takes some getting used to as one gets into the sport. A server serves one time in an underhand stroke that strikes the ball below the waist. If the ball tips the net and lands inside the receiving court, the server is allowed another serve; otherwise, there is only one serve allowed. (In regular tennis, the server gets two attempts to deliver a serve that lands in the correct court.)

Both Chris and Mike are encouraging more POP Tennis players to sign up for organized play on the Tennis Center website. Membership in POP Tennis is expanding as more and more tennis players, who perhaps cannot play at the pace they used to play, or are recovering from surgeries, or who do not want the competitiveness of regular tennis, find they can still enjoy the outdoors.

There will be regular drop-in POP Tennis sessions. The dates, times, and court locations will be on the SaddleBrooke Tennis Center website, so check it out.