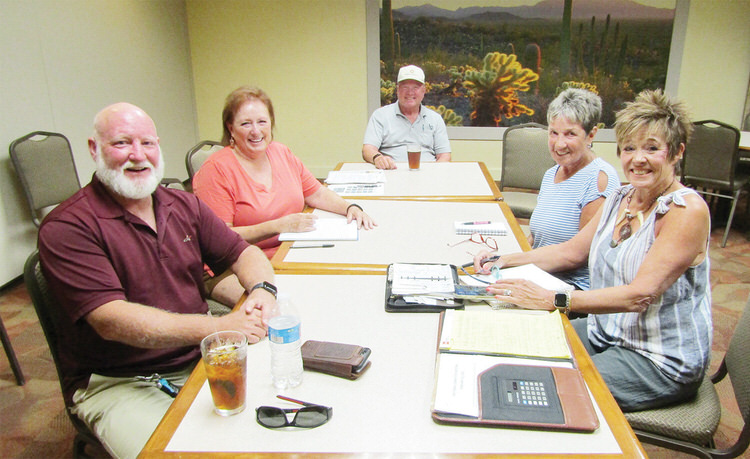 Douglas Wolf, president of the SaddleBrooke Tennis Club, and Fran Mickler, liaison and chair of the POP Tennis committee, led the meeting. They brought everyone current about SaddleBrooke Courts one through eight being striped for POP Tennis play, plans for a POP Tennis fun social, and the start of another drop-in tennis session from October to December.

There will be a POP Tennis demo for those who want to learn about the sport. This will provide instruction about the ins and outs of this slower form of tennis, called POP Tennis. Mike Dunbar and Carol Kula have offered to lead the demo, with others assisting, depending on the number of persons signing up for the demo.

POP Tennis is played in teams of two, who play three sets of six games. Interested individuals may sign up for courts at the tennis center.

There are two levels of participation, leisure and organized. Leisure POP Tennis players may be former tennis players who want a friendlier pace or may be recovering from surgery. Organized play tends to be against players who have been in the game for quite some time or are looking for something more competitive.

SaddleBrooke is a family of many excellent athletes in various sports, who now enjoy the life of being in an active retirement community. We have former racquetball champions; Olympic contenders; swimming, bicycle, and ping pong champions; Boston Marathon and local marathon runners; and excellent representatives in many sports, such as pool and chess.

POP tennis is basically a slower version of tennis and is less demanding on the body, at least in my opinion. Serves are underhand, the court has no alley, and the court is perhaps a third shorter than a regular tennis court.

Court time is available for all SaddleBrooke residents. Morning times are usually reserved for members who have paid their membership dues. At present, SaddleBrooke One is in charge of courts one through eight, and SaddleBrooke TWO is responsible for the courts in MountainView and DesertView.

For more information, contact the tennis center at saddlebrooketennisclub.net.