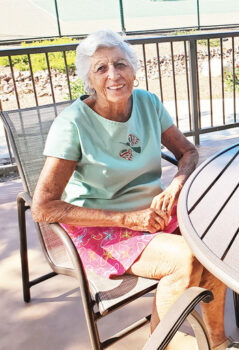 Stuart: At 86 years are you too old to play POP Tennis?

Loretta: Well, I play POP tennis three times a week, tennis once a week, quilt on Friday, do machine embroidery on Thursday, and on Monday I am with the HOA2 Putters. I aquacise in the pool daily, and other than that I try to stay busy.

Stuart: What other sports have you been in?

Loretta: In high school I was on the swimming team, and played basketball and volleyball. As a child, I used to bicycle and walked on stilts.

Stuart: You had stilts?

Loretta: Yes, my mother made them!

Stuart: Tell me about tennis.

Loretta: I was rated 3.5 USTA (United States Tennis Association) and was moved up to 4.0, but could not really play at that level. As 3.5 I competed for several Sectionals with various teams, but we always came in second place. At the Santa Clara Tennis Club in California, I played with the Kona Kai Team.

Stuart: When did you move to SaddleBrooke?

Loretta: We have been here 18 years. Carol Kula invited me to play POP Tennis, and I have been a fan ever since. I love the underhand serve, the shorter courts, and feel it is a better sport for my body.

Stuart: And your cross court returns of serve are winners almost all the time!

Loretta: Well, I have been playing tennis for over 50 years, and have learned a thing or two now and then! Too old for POP Tennis? Not yet.