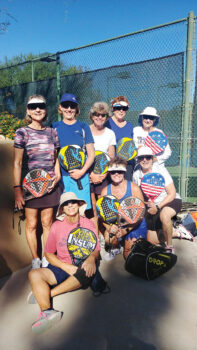 After the 8 a.m. rotation on Oct. 8. You can see by the smiles that a good time was had by all.

Pop tennis is a century old paddle sport that until recently was called “Paddle Tennis.” Rebranded as pop (for popular) tennis in 2015, people enjoy the game because it’s played on a shorter tennis court (using tennis scoring) but is easier to play because of the composite paddles with memory foam; a slower, depressurized tennis ball; and a single underhanded serve.

The United States Tennis Association (USTA) saw the newly renamed pop tennis as an ideal feeder sport for tennis and officially adopted it under the USTA. This gave pop tennis a strong, official backing. Club professionals consider it an ideal way to increase tennis participation and fully utilize tennis facilities. It is an alternative for tennis players who for one reason or another can no longer play the full court but still love the game.

Pop is a lot like tennis because it’s played with an actual tennis ball. Its strategy is also similar to conventional tennis strategy. Meaning, the goal is to get to the net and put the point away. It also has some similarities to pickleball, because the court is smaller and it’s easy to learn and play for all ages. However, in pop tennis there is no “no volley” zone.

During the spring and summer, SaddleBrooke experimented with the concept on a limited basis by offering drills, and enthusiastic group began to form. Several players took on the responsibility of organizing play. Carol Kula, Joan Ebbeson, Karen Pachis, and Cynthia Pierson arranged for the courts and created an email sign-up list of 42 players of all abilities who regularly turn out to play together. Players rotate every four games, so that everyone serves and there is a nice mix of opponents. Pop becomes official in November under the tennis club umbrella. Call the Tennis Club at 520-825-0255 for more information.