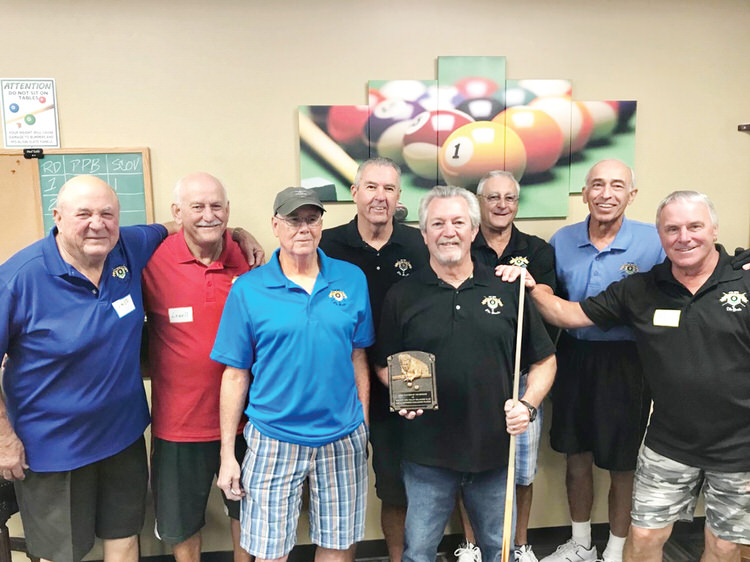 Pool Players of The Brooke vs. Sun City Oro Valley

The Pool Players of the Brooke (PPB) would like to thank Sun City Oro Valley’s (SCOV) Billiards Club, Robert Dufur, and the SCOV’s billiards team for their pool table prowess, camaraderie, friendly competition, and congenial luncheon at the RoadRunner Grill after the Eight-Ball Challenge. Another big thank you goes out to Dominic Borland, PPB Travel Team captain, for organizing this event. On Nov. 20, the SCOV’s Travel Team ventured up to SaddleBrooke One’s Catalina Recreation Center for an Eight-Ball Team Challenge. Dominic Borland and Ron Ridge were the tournament directors, with Randy Smith as the official scorekeeper. We were competing on four beautiful, eight-foot Connelly pool tables for temporary ownership of a traveling bronze plaque that has been in SCOV’s possession since Feb. 10, 2020. Our team was made up of four two-player teams, and SCOV also had four two-player teams. Our teams consisted of Fred “The Baker” Dianda and Phil “The Fixer” Jelliff, Dominic “The Doctor” Borland and Gary “One Rail” Barlow, Tony “The Snake” Cardillo and Jim “Shooter” Fabio, and Jack “Crash” Hoverter and Lowell “8-Ball” Hegg. The format was simple and interesting. Each of our teams would play each of their teams three games of eight-ball, with each game won being one point for the winning team. There were a total of 48 points in the match. PPB won the first round eight to four. The second round was a wash, with each team winning six games. After the second round, the PPB was ahead 14 to 10. The third round was a repeat of the first round, with the PPB winning eight games to SCOV’s four wins. The PPB went into the final round up by a score of 22 to 14. The final round found the PPB only needing to win four games to win the right to keep the bronze plaque in SaddleBrooke. The PPB did it! The fourth round’s score was six to six. The final score was 28 to 20, and the PPB mounted the bronze plaque on our wall! This event was the continuation of a friendly but fierce rivalry with SCOV, where the PPB has won twice, tied twice, and lost once out of five competitions since February 2017. SaddleBrooke is proud of their team, and they thank SCOV for competing in this travel team match.

Visit the Pool Players of The Brooke at https://poolplayersofthebrooke.blogspot.com. 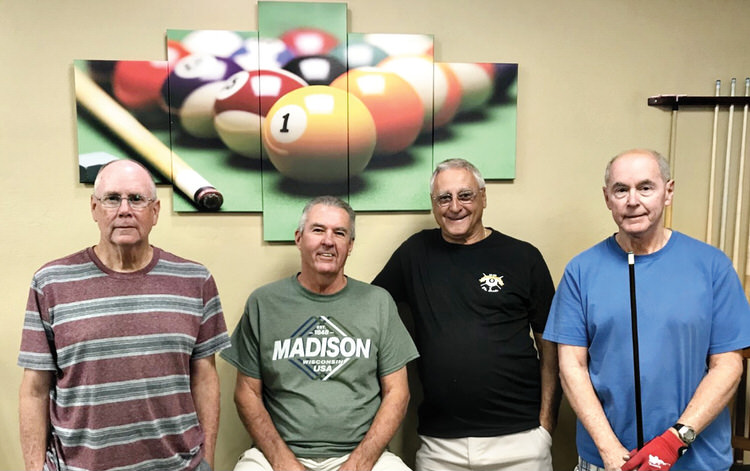 Tony Cardillo’s victory over a field of 16 skilled eight-ballers was accomplished as follows: Jack Hoverter was his first opponent and a real threat, but Tony won this one. Next up was Phil Jelleff, who faced the same fate as Jack. Then Dick Titus was Tony’s next victim. In the semi-finals, Tony would face Gary Barlow, and Gary sent Tony to the loser’s bracket. In the loser’s bracket, Jack was waiting for Tony, who had sent Jack to the loser’s side earlier in the tournament. Jack again was not up to the task, and Tony defeated him for the opportunity to challenge Gary for the championship. Tony would have to outplay Gary twice to win the title. That’s exactly what Tony did; he won two straight games of eight-ball over Gary for the win. Congrats, Tony “The Snake” Cardillo, on your second tournament win.

The PPB wants to thank all our participants and our sponsors, Leah Kari and Beth Fedor, for their support. The Eight-Ball Singles Tournament started at 1 p.m. and lasted two hours, with 31 games of eight-ball being played. We competed and met some new friends who shared our passion. That is a good day! Rack ’em up!

Visit the Pool Players of The Brooke at https://poolplayersofthebrooke.blogspot.com. 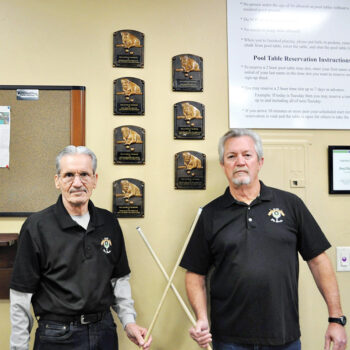 The Pool Players of The Brooke (PPB) Travel Team was started by Dominic “The Doctor” Borland, one of the PPB’s founders, previous vice president (twice), and the only Travel Team director the PPB has had. The PPB Travel Team began competitions on Oct. 29, 2016, at Mission Royale in Casa Grande, Ariz., where the PPB defeated Mission Royale 30 to 18. This was the start to a six-year-long run of competitions headed up by Dominic Borland. In the past six years, the PPB Travel Team competed 20 times against Green Valley Recreation, Sun City Vistoso, Quail Creek, SaddleBrooke Ranch, Sun Lakes in Maricopa County, Mission Royale, and Sunflower in Marana.

Our Travel Team is made up of any PPB member who wants to compete against other communities. The team is selected by the member first committing to playing against a community and then based on their skill rating. The current PPB’s skill rating was developed by Ron “dblo7” Ridge and Randy “Thin Man” Smith. It is optional for our members and used to determine the level of skill an individual player exhibits in the game of eight-ball. It consists of four abbreviated eight-ball games, with each worth 10 points and point deductions for missing a ball, fouls, and scratches. A perfect score would be a skill rating of 40. Regularly, our Travel Team participants have skill ratings of 30 or better.

When we compete against other communities, the prize is temporary possession of a traveling bronze plaque engraved with “The Pool Players of The Brooke” and our opponent’s name. There are seven of these plaques in existence. Our Travel Team has had great success lately, and you can view this success by visiting the Catalina Recreation Center Billiard Room because all seven of those plaques are on our wall. Yes, at this point, the Pool Players of The Brooke’s Travel Team is perfect! Seven out of seven traveling plaques are on our wall!

The Pool Players of The Brooke’s Travel Team is undergoing a transition since Dominic has determined it’s time for him to step aside and let some new blood into the PPB’s Travel Team. So, as of Jan. 1, 2022, Tony “The Snake” Cardillo will take the position of PPB’s Travel Team director. Tony will have big shoes to fill, as he takes over a Travel Team with all seven plaques in its possession.

The PPB would like to extend a huge thank you to Dominic for his six years of successful service, and we welcome Tony Cardillo as our next Travel Team director. We also want to express our gratitude to all our members who have participated in the Travel Team’s events and hope you will support Tony in the future as much as you have supported Dominic in the past. Good luck, Tony and the PPB’s Travel Team!