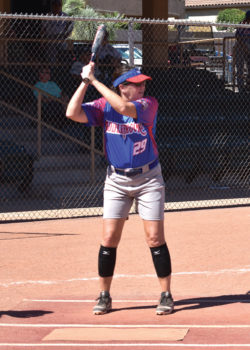 After a 73-day shutdown due to the coronavirus pandemic, SaddleBrooke Senior Softball is back.

The league kicked off its summer season June 1, with 94 men and women once again playing Monday through Friday in five different leagues based on skill level. Because the spring season was canceled, the summer league has been extended to 16 weeks.

The league has instituted a number of guidelines to ensure player safety because of COVID-19. These include encouraging social distancing for players and fans, providing hand-sanitizing stations, turning off water fountains, rotating game balls, prohibiting equipment sharing and post-game high fives and other protocols. There also will be a field monitor for every game to keep everyone at a safe distance.

“We’re thrilled to be back on the field,” said association president Joe Passoni. “However, our number one priority for the season is ensuring the health and safety of all involved with the league. That’s why we developed these measures which are posted throughout the ballpark.”

As expected, the players couldn’t wait to return.

“I missed the game itself and all that goes along with it, especially the camaraderie among players,” said John Reingruber, who’s been playing at SaddleBrooke since 2009. He looked forward to re-engaging with everybody—players, umpires, scorekeepers, and fans. Reingruber did note that during the softball hiatus, he was able to catch up on household chores, especially working in the yard and organizing his garage. No wonder he’s excited to be back.

Jeff Stolze also missed not being out on the field with his teammates and was ready to get back in softball shape. “The wins and losses seem less important now than just being able to be on the field,” he said. Like Reingruber, he did endless projects around the house while softball was shut down, but also found time to ride his Harley-Davidson and train his guide dog puppy.

Like her fellow players, Stacy Dawson missed the camaraderie the most. She was just beginning to know everyone since moving to SaddleBrooke within the past year. “I looked forward to seeing everyone again and playing a sport I’ve loved and played since I was 10,” she said. During the break, she walked many miles with her husband and dogs. She also took up biking for the first time.

SaddleBrooke Senior Softball is in its sixteenth season. If you are interested in playing, volunteering, or simply watching the games, go to saddlebrookesoftball.com to learn more.