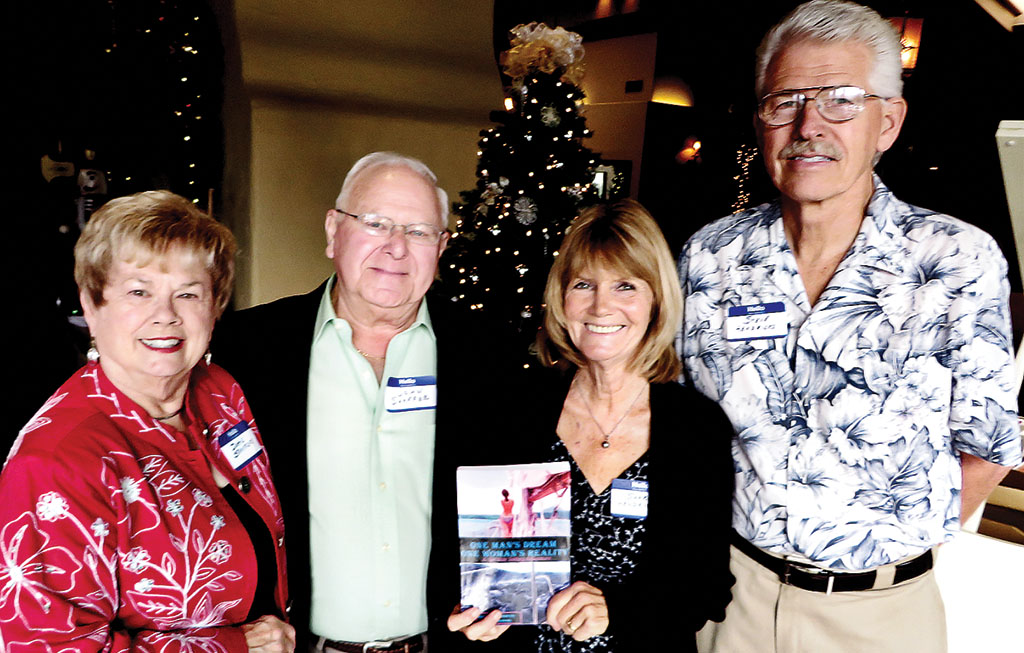 Dottie and John Shaffer with Sharon and Steve Hendricks–Sharon is holding their book One Man’s Dream, One Women’s Reality

A narrow escape from pirates, major storms and 26,000 nautical miles later, Sharon and Steve Hendricks have decided that the port of SaddleBrooke is the place to be anchored (until the next sailing adventure).

It started in 1999 in Seattle – when Mr. and Mrs. Hendricks began their six year sailing adventure through Polynesia to New Zealand and then north to Hawaii. Based on the events and encounters of the journey, they have written a book, One Man’s Dream, One Women’s Reality.

Steve and Sharon had sailed in and around Seattle for a number of years in their 37 foot, 1969 Buchan sailboat named SV Poets Place. Not a big sailboat, narrow by today’s standards, and not a sailboat that you would consider to be the Hendricks home for six years on the sea. And on the sixth day out to sea from Seattle, Poets Place and crew hit a major storm with 25 to 30 foot waves. This storm was the largest encountered on the trip and was an unplanned, but vital training experience for the remainder of the trip. The noise and wind was terrifying, as well as keeping control of the boat while surfing down the huge waves.

After this storm and repairs to the rudder, the Poets Place continued with a southern bearing along Central and South America and then on to the Polynesian Islands. But 200 miles off the Columbian coast, five pirates attempted to board the sailboat—.

Communications is one’s life-line while on the open sea. Steve said he used the High Frequency world-wide Ham radio network and a hand-held GPS device for navigation. Using special modulation techniques, Steve was able send and receive email from his computer, through the radio, to Ham radio operators in the Southern Pacific. Once received, the Ham operators would forward the emails via the Internet. One daughter, Michelle, flew to many ports to be with Steve and Sharon. Steve also setup solar panels for charging batteries, built an auto steering mechanism, and did all of the boat repairs.

Sharon Reed-Hendricks is a noted poet, has published two books of poetry and she has written numerous articles for sailing magazines. If you think you can’t live out your dream because you don’t have enough money or time, Sharon says it all in a verse from her poem Maybe:

Maybe you can’t live your dream out

For you have work to do

Well you can wait for the right time

But time won’t wait for you

The Hendricks’ have slide shows and presentations and are happy to share their many experiences: five years of preparation, six years of sailing, enjoying new cultures, new sites and finally the tension of readjusting to the U.S. culture in Hawaii.

Order their exciting book, paperback or Kindle format, from Amazon. And visit their website www.poetsplacesailing.com for photos, videos and more information about their passages—. Finally—How did they evade the Pirates?