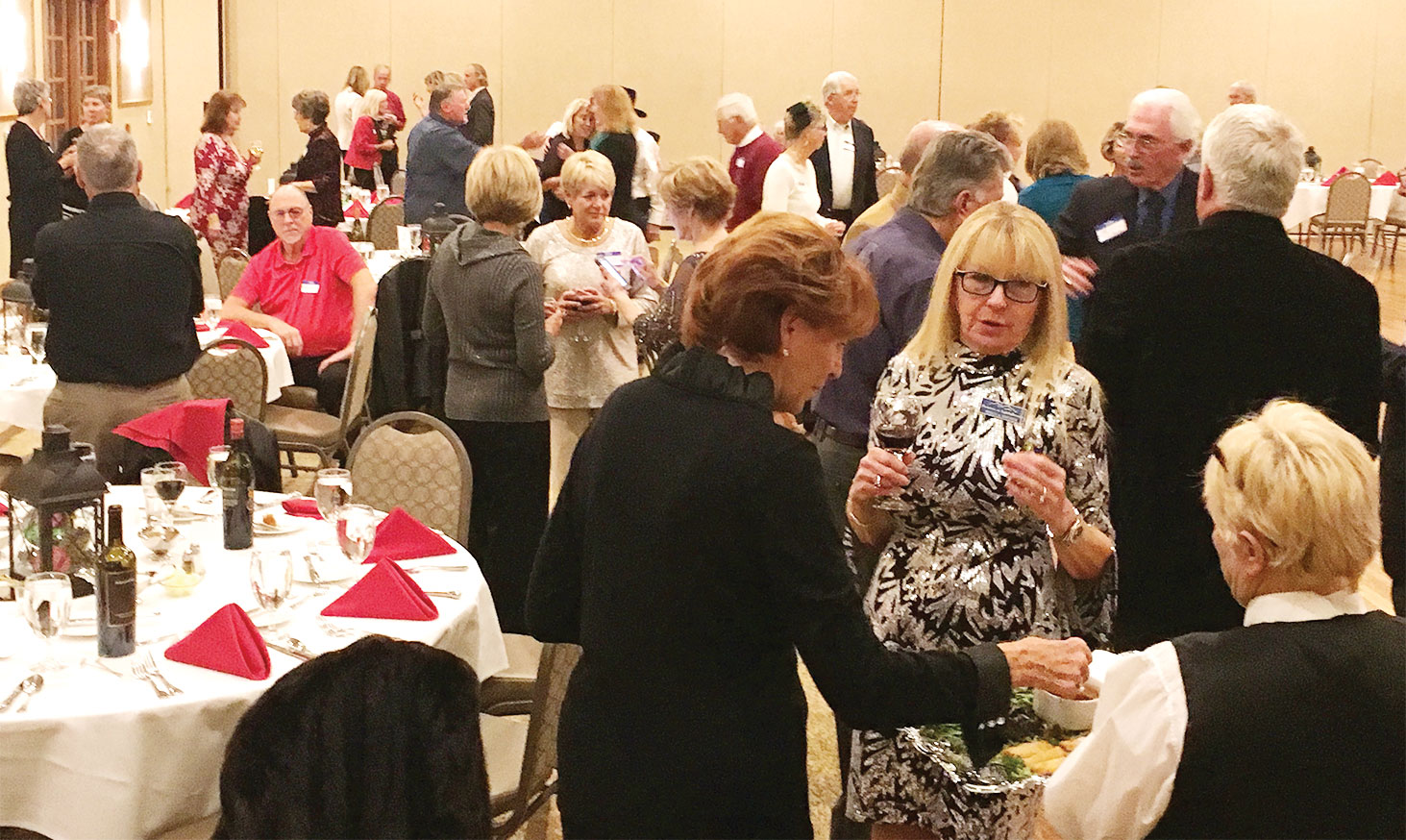 Pickleball players warming up before the strenuous activities of feasting and dancing.

SaddleBrooke Pickleball Association (SPA) rallied at the MountainView Ballroom to catch up on the pickle pipeline, celebrate the season and spend a night doin’ da dink on da dance floor at the holiday party December 4. The Court Chums let their hair down, grabbed their high-heeled sneakers and gave a show of some pretty fine haberdashery that required some to relearn the fine art of button fastening. Since it’s nearly impossible to recognize Court Comrades without mat-hair, flat-hair or hat-hair, name tags waited at the door; however, the security checkpoint was deactivated, due to the large number of bionic body parts that would have blown the metal detector ballistic and shatter into smithereens. Inside every seasoned Pickleball Player is a person wondering what the heck happened, and even though bodies start to age in dog years after 65, we just keep on chasing that little ball.

Bartenders Tony and Darian and Servers Sharon, Barb and Brett provided us with nips and nibbles during the paddle prattle and Chef Alan and Sous Chef Jesus won our hearts and tummies with entrée choices of Filet Mignon, Chicken Picatta or Miso Salmon, accompanied by salad, mashed potatoes and green beans. The grand finale to this holiday feast, if you could survive it, was Death by Chocolate. Those who were able to recover from this treacherous triple surge of chocolate dangermania did so only by dancing it off to the jumpin’-jivin’ medleys and tunes of DJ Warren Bonesteel.

Goodness Gracious Great Pickleballs of Fire! This group doesn’t take things sittin’ down. You should have seen the parade of Pickler Peeps hot footin’ it to the dance court like they were goin’ to the net. There was a bit of Snap-Crackle-Pop goin’ on from these fit, but remade, remodeled athletes during the Zero-Zero-Two Step, Backhand Box Step, Third Shot Old Soft Shoe and Cross-Court Cha Cha. During the Net Hustle and Backspin Boot Scootin’ Boogie, the team spirit moved us to group line dancing and made us right proud to be members of the Mile-Long Club. Everyone was on their A-game and rated a 5.0, except for the couple who always seemed to be in the wrong place at the wrong time doin’ the No Man’s Land Limbo.

Canned goods were collected for IMPACT of AZ Food Bank. A few old Court Coots whose fading upper spheres have begun to yellow and develop air holes causing them to whiff on remembering their canned goods, were given a second serve and allowed to redeem themselves by making a cash donation to this great cause. SPA President Jon Bailey recognized the retiring Board Members who were present, Mark Van Matre (Vice President) and Rick Heine (Secretary), for their exemplary service to SPA. And a huge full-court thank you to Social Chair Linda Bailey for her extraordinary event planning with MV Banquet Managers Liz and Jessica and her side-line team Sue Deskovich, Mary Gajeske and Ann Lange. This party really smashed it! Clean-up on Courts 1-6!