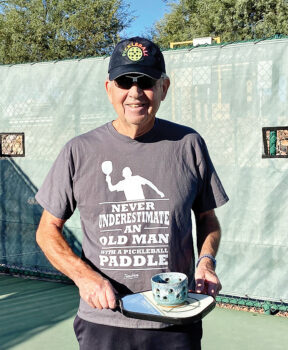 Frank Mucklo is a highly active member of SaddleBrooke Pickleball Association (SPA). A USTA competitive tennis player, Frank heard about a game called pickleball being played in SaddleBrooke. He tried it, was a natural at it, and was hooked.

“In the first years here we played tennis until someone said there was a game called pickleball. I think that was about 2010. For a couple of years, I played pickleball only in the winter and played the USTA Tennis leagues back in Ohio in the summer. Pickleball was just starting there. As we stayed longer here in SaddleBrooke, I played more pickleball and fell in love with the social and fun aspects of the sport. This led to playing tournaments and meeting lots of great people. Today I don’t play much tennis anymore and it’s almost all pickleball. I found that I really enjoy coaching new players and seeing them come to enjoy the game as much as I do,” Frank explains.

Frank regularly coaches 2.5 and 3.0 clinics sponsored by SPA. Instructing other players provides Frank the pleasure of seeing his tips help others enjoy the game. He employs the teaching curriculum, evaluates his four players and provides personalized instruction. The group begins by drilling and after an hour of honing skills like serving, returning serve, and dinking, the group proceeds to a second hour of playing games. Frank identifies issues that arise during play and gives players tips to improve.

“Ball control is emphasized as many players tend to over-hit the ball,” Frank says.

As a coach, he is patient, insightful, serious about the game, and a great teacher. His enthusiasm for pickleball is contagious. His commitment to the members of the club is inspiring.

To nurture his artistic side, Frank is a member of the SaddleBrooke Pottery Club and uses a pottery wheel to create beautiful ceramic pieces. He finds enormous satisfaction producing something tangible with his hands. Frank is passionate about gardening, and has a collection of cacti and succulents that “I try not to kill,” he quips. Country Western dancing and following his favorite band, Wild Ride, have been ongoing activities he enjoys with his wife. Instead of slowing down, Frank employs a friend’s advice to guide him: ‘Speed up—you’ve got less time!’

Frank is originally from the Cleveland area and in an all too familiar story, he was urged by some friends who lived in SaddleBrooke to visit. Having previously spent winters in Hilton Head or Florida, he and his wife MaryJane finally decided to make the trip. They rented for five winters before making a permanent move in 2014. They loved the scenery, the relative lack of bugs, the active lifestyle, and most of all the friendly people they met. Frank leaves behind a career in construction with a company focusing on cooling towers for large institutions.

“I am enjoying every moment of retirement, and pickleball is something that truly gives me joy each day. I find it the perfect avenue to nourish emotional and physical health,” he said.

Having done website development and maintenance for several businesses, Frank is helping with the development of the new SPA online store. He has taken his friend’s advice and not slowed down in any way. SPA appreciates all of the energy Frank has so generously contributed to making the club even better!