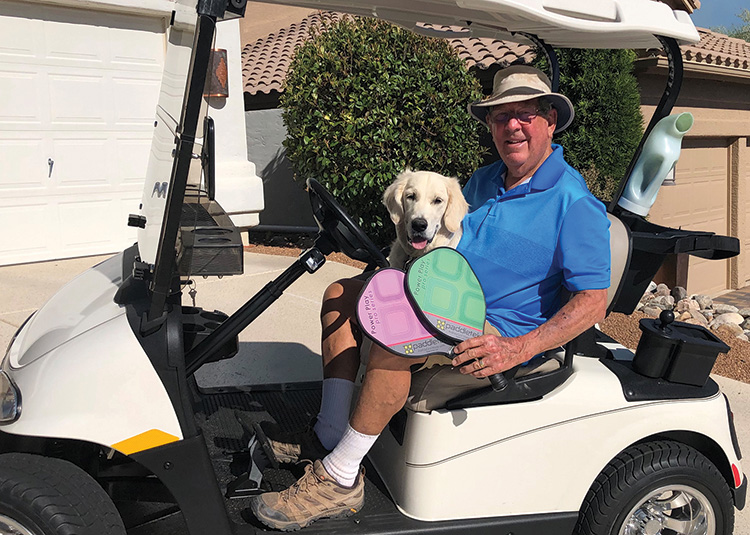 Fighter might be too strong a word when we think of SaddleBrooke Pickleball Association (SPA) member, Harvey Durand. Anyone who has played pickleball with Harvey knows that he is a fierce and skilled competitor, but he also always has a huge smile on his face on and off the court. When Harvey faced a personal health challenge recently (Mantle Cell Lymphoma), he found a way to win the battle with his usual good humor and grace.

Harvey’s journey for a cure began when the course of treatment he originally pursued was no longer effective. Unwilling to accept a bleak future, his persistence led him to a clinical trial that National Institute of Health (NIH), in Bethesda, Md., was about to begin. NIH has 30,000 scientists working on cancer in a 300-acre, 70-building complex. After a full genetic profile to examine his medical qualifications for the trial, Harvey, and one other person, were approved.

Harvey was admitted to the hospital at NIH. Part of the preparation for the trial involved a lengthy, 14-day course of gradually increased doses of a very strong chemotherapy drug. Knowing what he was going through, SPA members, led by Scott Whiting, participated in short video messages of encouragement to Harvey. He reports that his days in the hospital were brightened immeasurably by this simple act of kindness.

Harvey has led a very interesting life. He grew up in Southern Arizona on the historic, family-owned (since 1948) Saguaro Lake Guest Ranch. It is still owned and operated by his family. The ranch has a beautiful setting on the banks of the Salt River. It attracts celebrities, special events, and has been used for movie and television sets. Harvey studied Geology at University of Arizona, but discovered an overriding interest in and aptitude for business. This led him to many successful roles with companies ranging from Jewel’s Osco Drugs, Payless Drugs (which he helped turn around), Albertsons nationwide, and Vons. A Hawaiian company that owned hotel gift shops had Harvey build them an organization on the mainland. Under his leadership the company added 50 shops into major, upscale hotel chains, like The Ritz Carlton and The Four Seasons.

How did Harvey find pickleball? He and his wife retired and moved to Lake Arrowhead, Calif. Not one to rest on his laurels, Harvey opened an upscale coffee shop and, three successful stores later, sold the business and moved to SaddleBrooke. While in Lake Arrowhead, Harvey was a member of the local tennis club. Membership was lagging and the club hired a consultant for some advice. The advice received was to add pickleball. The club followed that advice, added a pro, and membership increased by 80 people in the first year. This validates what we all know now—pickleball is in demand. Build it and they will come. Harvey, a former tennis player, racquetball player, and skier, became an instant fan of the game.

When Harvey really retired, pickleball was a must-have amenity for his new community. SaddleBrooke’s Pickleball Club was a perfect fit and has provided an outlet for what has become a passion. Anyone who has played with Harvey can attest to his considerable athletic skills and his delightful court demeanor. The mischievous glint in his eye, as he uses his crafty paddle skills to win a point, is really fun to watch.

The NIH trial was a success for both patients and Harvey is now in remission. He will head back to Bethesda periodically for follow-ups. He is feeling better since he has finished chemotherapy and faces a cancer-free future. Harvey’s beautiful English Cream Golden Retriever, appropriately named Hope, gives him comfort along with his loving wife, Ginny. Although it will be some time before he is back on the pickleball courts, he patiently waits with his customary positivity. SPA members are anxious to welcome Harvey back.