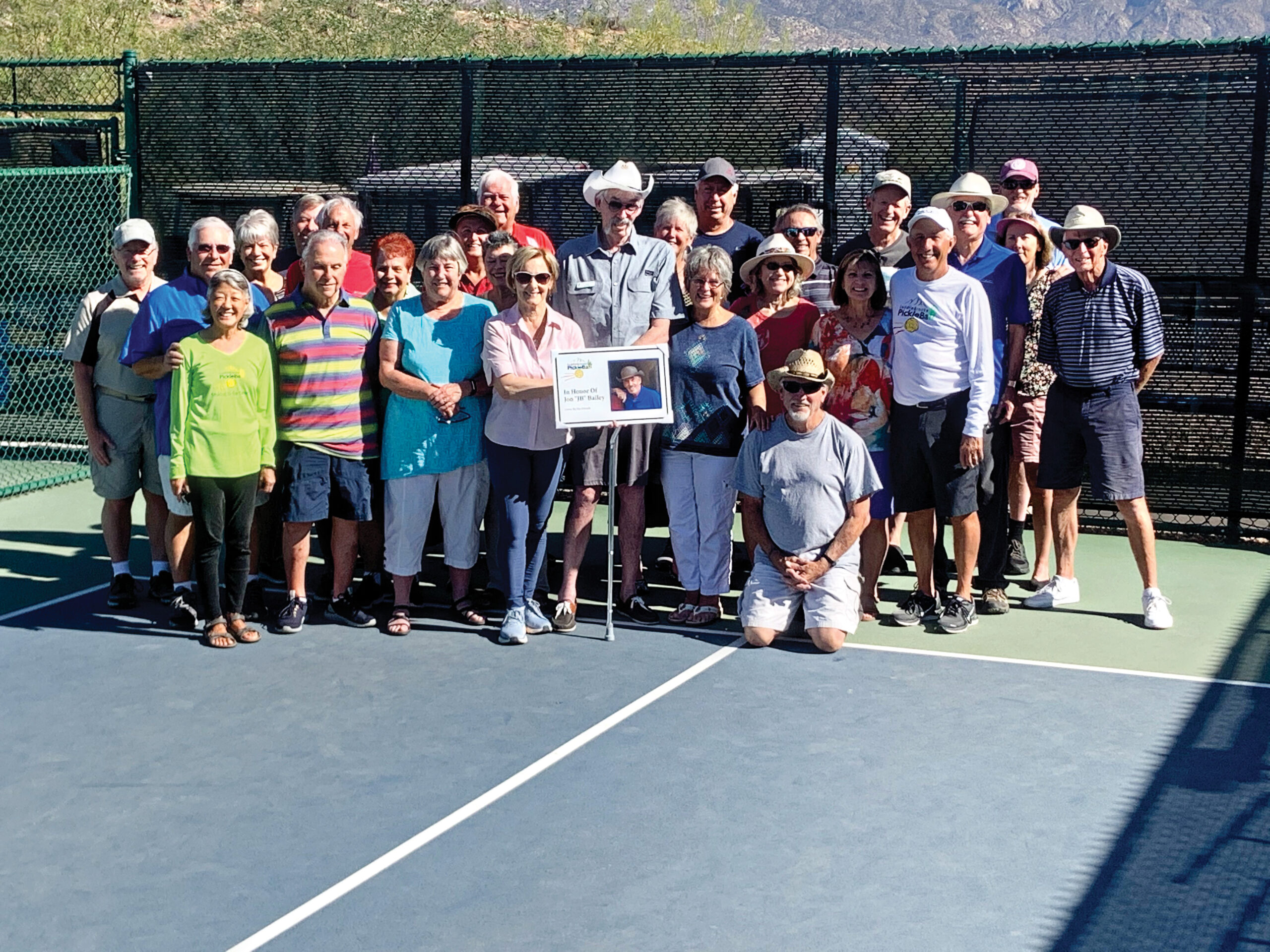 In a touching tribute to long-time friend and pickleball enthusiast, Jon Bailey (JB), 26 couples have made donations to the SaddleBrooke Pickleball Association Inc. (SPA) to name a court in his honor. Once the new Ridgeview Pickleball Complex is built, the community will find Jon Bailey’s name on one of the pickleball courts. The idea to honor JB in this way originated with Ron Solomon, SPA parliamentarian during JB’s two-year tenure as SPA president. It was then expanded upon by a SaddleBrooke adventure group known as the Rockin’ Roadrunners, while on an excursion to Rodeo, N.M. It was at this retreat in Rodeo that long-time friend and neighbor, Jim Schlote, decided to put Ron’s idea into action. Jim stated, “It was truly heartwarming to see how quickly Jon’s pickleball friends responded. Once the information was distributed by email, it only took 48 hours to raise the funds needed to name a court in JB’s honor.”

Perhaps best known by SPA members as one of the organizers of Friday Night Lights, this fun event epitomizes all that is special about pickleball. Weekly, over 30 players from SPA and The Ranch Pickleball Club played pickleball at night under the lights, mixing randomly with those attending. JB would blow his coach’s whistle, signaling the time to stop one game, mix up, and start another. Of course, the evening would not be complete without enjoying some adult beverages and elaborate snacks under the ramada following the evening’s games. JB owned the host role and relished being the MC for the evening.

JB started playing pickleball at The Preserve with his wife of 51 years, Linda, and a small group of friends, when other sports he had considered just did not stick. Embracing pickleball, his signature booming voice and cowboy hat became constant reminders that he was there, likely delighting in sneaking another clever lob shot past his opponents. JB served as president of SPA for two years and currently holds a position on the board. A thoughtful leader excelling at communication, the club flourishes under his care and leadership.

JB has developed close friendships with many, but the men’s Friday breakfast group of 10 (an offshoot of the Rockin’ Roadrunners that includes Jim Schlote) became so important to him and to the entire group, that during COVID-19, the group still gathered weekly via Zoom to continue to nurture their very special connection.

JB, Linda, and the Schlotes were enthusiastic travelers, using RVs to see Alaska, Canada, the Eastern United States, Coeur d’Alene, Albuquerque for the Balloon Festival, and Indian Wells, Calif. for the BNP Parabis Open Tennis Tournament and the Pickleball Nationals. Additionally, the Rockin’ Roadrunners had many adventures together seeing Capitol Reef National Park and Valley of Fire State Park together, some travelers caravanning by RV and others by car. When the Rockin’ Roadrunners decided to do a tour of Asia in 2019, JB (formerly employed by 3M with stints in Singapore and Brussels and as a Vietnam veteran serving as captain), assisted by his wife, Linda, took on the role of travel coordinator for a pre-trip excursion to show Pat and Jim Schlote Singapore. Jim says, “It was like having a personal tour guide.” They then joined the rest of the group in Bangkok for the remainder of the tour.

JB met Linda in Michigan when they both ended up with jobs at the same department store. She was just out of high school and JB had finished college at Wayne State University. Three years later, they were married. As a marketing manager with 3M, JB was a pro at team building, which is no surprise. When told about how he signaled Happy Hour Friday to his co-workers using a police bubble, it makes total sense to hear about the coach’s whistle he used to coordinate pickleball players for Friday Night Lights.

Though Jon has been unable to play pickleball in recent months due to an overriding illness, he is enjoying his family, including two grandchildren (ages nine and one). Using a syringe as a squirt gun, Linda reports that “he is now taking pleasure in provoking delighted squeals from his beautiful granddaughter.” In keeping with his reputation, JB’s friends and fellow picklers will be happy to know that he is still relishing his role as MC, though now in his own home and via Zoom.

Through the generosity of JB’s many friends, SPA members will be reminded each time they step onto “his court” of his playful spirit, joviality, friendship, and contribution to pickleball in SaddleBrooke. Making sure that everyone around him is having fun, despite life’s challenges, is inspirational. JB’s community is bursting with appreciation and gratitude for all JB has done and continues to do to enrich all of their lives.