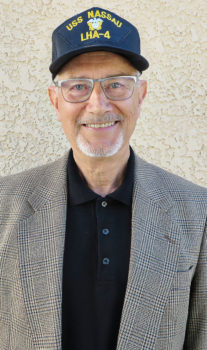 It was November and in keeping with tradition, it was a Veterans Day theme at the Resurrection Church Men’s Breakfast. Right at seventy attended, a record for the November breakfast. Those who had served were recognized and the group was honored to have as its speaker for the day, Pastor Roger Pierce, Commander, U.S.N. Chaplain Corps, ret. and currently one of the Pastors at Resurrection Church at SaddleBrooke. Roger’s talk was entitled “Church on the Go: The Value of the Military Ministry.”

Born and raised in Texas, Roger is a graduate of Southern Methodist University and the Brite Divinity School at Texas Christian University. After a brief stint as a pastor in Dallas, he entered the U.S. Navy. He retired with the rank of Commander in 1992 after twenty years of service.

A familiar face in SaddleBrooke, Roger was at the Community Church from 2004 to 2011 where he served first as the associate pastor and then as the lead pastor. He joined the pastoral team at Resurrection Church early on and occupies the pulpit there at least one Sunday per month.

The Resurrection Church Men’s Breakfasts take place the first Saturday of the month October to May. Meeting place is the Outreach Center at the main campus in Oro Valley. Time is 7:30 a.m. There is always an interesting program and the group is adjourned by 9:00 a.m.

The breakfasts are organized by a five-member steering committee and four of the five members of that group, Duane Hartzler, Ron McNutt, Al Toensing and Gary Zellinger, live in SaddleBrooke. Any SaddleBrooke resident interested in attending may freely contact any member of the committee for further information.

Resurrection Church at SaddleBrooke holds its traditional all-denominational Sunday worship services at 9:00 a.m. and 10:30 a.m. in the Vermillion Room of the SaddleBrooke One Clubhouse. All are welcome.