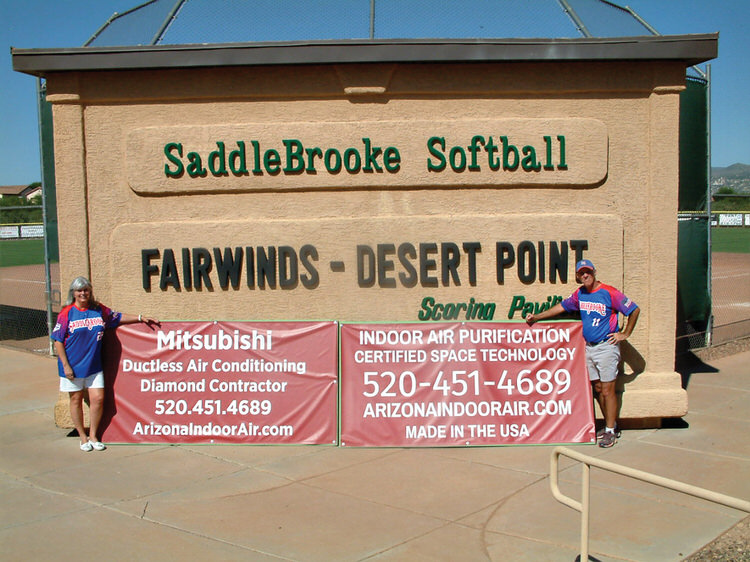 Well, softball fans, the big news is our Labor Day Tournament on Sept. 5, sponsored by Arizona Indoor Air, with the grillin’ again by Window Wizards was a success. Hope a few folks came down for some softball drama (and comedy) and checked out Indoor Air’s HVAC and Air Scrubber display. Gary and Pam Spencer had a raffle going on, and I heard that one of our fans won an indoor air scrubber! Thanks, Arizona Indoor Air.

We had four games beginning at 8 a.m. Whew! That’s a lotta talkin’ for yours truly, who, besides being a wordsmith extraordinaire, is the golden voice behind the mic at tourney time. The tourney started off with Recreation/Sidewinder, sponsored by Shifren Physical Therapy and Shelves that Slide. Shelves came out on top in a barn-burner 17-14. I had to slam a couple of lozenges (no, just the regular kind). At 9:30 a.m. the first Community (AAA/Coyote 65+) game, Ridgeview Physical Therapy thumped Rancheros Market 20-12. In the second Comm-Coy game at 11 a.m., SB Remodeling did a little behind paddling on SaddleBrooke Pet Rescue/Bill Wescoe (sorry, Bill) 27-16. Then came lunch! Our volunteers started dishin’ dogs, brats, kraut, chips, cookies, and sodas and waters to one and all. At 12:30 p.m. (Competitive) we had another barn-burner with Pride Mechanical squeakin’ one out over Player’s Pub 25-24. By then, it was about 3 p.m. (way past naptime), so we cleaned up and headed for our respective recliners. Well, I did, anyway. After a quick stop at the garage fridge for a cold one. Ahhhhh! And hey! Special thanks to Evelyn Longo for stepping in as tournament/events director.

And now for final league action! The summer season concluded on Sept. 23. On Monday, Community came right down to the nitty-gritty. Canine & Co had a half-game edge over Community Church of SB, with Coyote Golf Cars in the cellar. The Choir boys and girls had to win both ends of a doubleheader for the championship or beat Canine for a share. Not! After erasing a 10-run deficit in the top of the 7th in game one and taking a three-run lead, the Cars came back in the bottom to edge them by one. Then in the “decider” game, it was a pitcher’s duel, with Canine coming out on top 10-8 for the championship. On Tuesday in Competitive, there was no drama. Concierge Air got the win but has been in the cellar since day one, and so remained. DS Builders takes that Championship. On Tuesday, Community was tighter. Dominick’s Italian got the Tuesday win, but Drew’s Barbershop sewed up the title previously. Ditto the Wednesday Sidewinders. Golf Cars of Arizona sewed it up over Firetruck Brewing previously, although the Brewers took the finale 15-1. Ouch! In Thursday Coyote, Healthy Skin Dermatology sewed it up last week over Hardin Brothers Automotive, although “the Bros” took the finale 13-11. In Friday Competitive and Community, the league leaders, Jim Click Auto and Kristy McInnis-Coldwell Banker, respectively, had 5-3 leads going into Friday’s games, and both took the championships with final wins.

Fall season began Oct. 10! Our Veterans Day Tournament is Saturday, Nov. 12! For information, surf us at www.saddlebrookesoftball.com or visit the park. We were “off” from Sept. 24 through Oct. 9, but the regular junkies were often at the field of a morn’ anyway, hittin’, runnin’, sometimes catchin’, but often just expounding on various subjects, a few about which they seem to know a little, others not much, and many others (it seems) nothing at all. It doesn’t matter! “Often wrong, but never in doubt” is my motto!